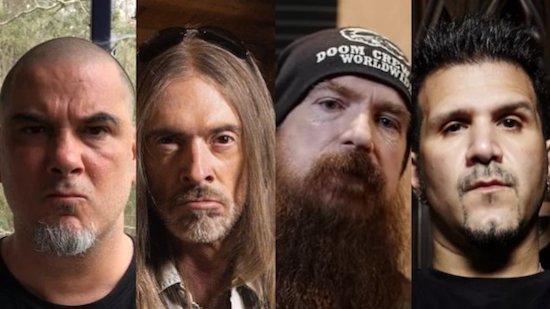 Wylde said (per blabbermouth.net), “It’s gonna be awesome. The fellows have always… When [drummer] Vinnie [Paul Abbott] was still with us, it was always rolling around that, ‘Zakk, would you honor [guitarist] Dime [bag Darrell Abbott] and all of us get together and do this thing?’ And I said, ‘Fellows, whenever you wanna do this thing, I’ll be over here waiting in the dugout and in the bullpen. And just call me when you need me and I’ll learn everything and we’ll go do this.’

“Throughout the years, there’s always been rumblings about it, so it wasn’t until, obviously, now… I was speaking on the phone with Phil — we might have been all on a group call — but Phil was just, like, ‘Zakk, would you honor Dime and would you play?'” he recalled. “And I said, ‘Yeah, Phil. Of course. I’ve always said I would. Of course.’ I said, ‘If you guys wanna go do it, then let’s do it.'”

Regarding playing Darrell’s parts, Zakk said, “You approach it the same way as you do when I’m playing with Ozzy. Obviously I’ve gotta learn [Randy] Rhoads‘ stuff and I’ve gotta learn Jake‘s [E. Lee] stuff, and when I was doing the [Black] Sabbath stuff, you learn it and do it as faithful as you can. Charlie’s gotta learn all of Vinnie’s parts. You approach it as if you’re in a cover band. When we do the Zakk Sabbath stuff,” referring to his Black Sabbath cover band, “I don’t start changing lyrics midway through War Pigs. You learn the songs — so that’s what you do.”

Benante concurred, saying, “I can’t go do this as the drummer from Anthrax because it would be a different sound completely. So, the way I’m gonna do that is if you close your eyes, it’s gonna sound like it’s Vinnie, basically. And that’s how it’s gonna be… The sound is gonna sound exactly like him.”

When asked when he was approached about taking part in the tour, the drummer said, “Oh, man. December [of last year]. End of December. I was talking to Philip, and then he just mentioned this. And I said, ‘Oh, yeah, sure. Whatever.’ And then it became real about January [or] February… To this day, if it happens, if there’s one show that’s played, great.”

When asked about whether he knows when the first show from the is going to happen, Benante said, “No.”

Both Benante and Wylde went on to say that they see the Pantera tour as nothing more than a celebration of the music created by the legendary Texas-based act. “Absolutely,” Benante said. “And I think everybody in [Anthrax] feels the same way about those guys. We go back a long way [with Pantera] — ’86, maybe even ’85. We played a show at a place called Cardi’s in Houston, and Pantera were the opening band. It was in [April] ’86. Helstar was on the bill. It was the first time we met them. My friendship with Darrell goes a long way, and I love both of those guys so much. So, for me, it was a very emotional thing to do this. That’s what it’s all about — it’s all about those two guys and doing it… I don’t wanna see anybody else doing it but me, ’cause I’m gonna do it right.”

Added Zakk, “Whenever [the idea of doing a tribute has] come up, you’re celebrating the guys and you’re celebrating all their achievements and their greatness. And that’s what it is. ‘Cause everybody was just, like, ‘How can they call it a Pantera reunion?’ And I go, ‘Well, it’s Phil and Rex getting back together,’ ’cause they haven’t played together for a while. I go, ‘It’s a Pantera celebration.’ That’s what it is. It’s no different than Mitch [Mitchell] and Noel [Redding] from Experience Hendrix asking Eric Clapton to come out and sing and play Jimi‘s [Hendrix] stuff and honor him, and they’re gonna go out and honor Jimi Hendrix. To me, it’s the same thing. With Ozzy, we honor Saint Rhoads every night. Every time we’re playing I Don’t Know, Mr. Crowley — everything — you’re honoring Randy. To me, it’s an extension of that. You’re honoring Dime, you’re honoring Vinnie and you’re honoring Phil and Rex, all the guys, their achievements, what they achieved as Pantera and all the mountains they conquered. That’s the way I look at it. That’s the way I’ve always looked at it.”