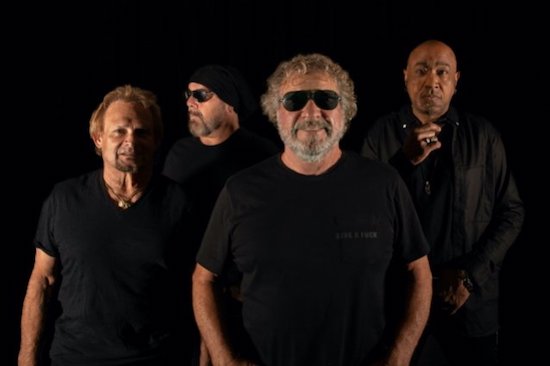 Rock And Roll Hall Of Fame-inducted Grammy Award-winning singer, songwriter, performer, entrepreneur and New York Times best-selling author Sammy Hagar has announced the release of his second studio album with his Billboard chart-topping supergroup The Circle. The LP, titled Crazy Times, finds Hagar, fellow Hall Of Famer and Van Halen bassist Michael Anthony, Grammy-winning drummer Jason Bonham and Grammy-winning guitar virtuoso Vic Johnson changing course, traveling to Nashville to record the album with eight-time Grammy Award-winning producer Dave Cobb at Nashville’s historic RCA Studio A. Due out September 30th through UMe on CD as well as digitally, with the vinyl following on October 28th, the album’s title track is available today on digital and streaming platforms. The CD and vinyl configurations, including a translucent red color vinyl exclusive, are available for pre-order. The official Travis Detweiler-directed music video for the album’s first single, the Crazy Times title track, can be seen below.

Hagar shared about making the album, “Working with Dave Cobb for the first time was enlightening. We went into the studio to record in the fall of 2021, when the world was starting to come out of the pandemic bubble we’d all been living in. The lyrics for Crazy Times just came from that new freedom we were feeling, the freedom felt unbelievable, but a little uncertain, too. We had to ask ourselves ‘what are we doing here and what do we want?’

Going back in the studio, creating and being with the music is just what felt natural. And it was just so different from any record I’ve ever made. There was joy in the hard work, catharsis and the comradery we’d craved. It was like those two years of not being able to do very much fell away and we really all came together and let it out in the music and lyrics. We were able to express what we all felt.”

Crazy Times, the band’s long-anticipated sophomore album, is a follow-up to their much-lauded debut Space Between, a multi-category number one Billboard-charting album. The new LP will include 10 songs, nine of which Hagar wrote or co-wrote, along with a notable cover, Pump It Up, a 1978 song by Elvis Costello and The Attractions. The song Crazy Times was written by the whole band along with Dave Cobb and recorded live.

Sammy explains, “Before I stepped into the studio with Dave, he’d told me he wanted the best of my career on this record, and he wasn’t going to let me get out of that studio until I gave it to him. So, I said, ‘If you expect that from me, at my age, as many records as I’ve made, you’re going to have to push me,’ and he said no problem. Obviously, I dug down and just tried to write good strong songs, great lyrics, great melodies and not worry so much about the arrangements because he had that covered. And he pushed and squeezed every one of us. We went in the studio with seven songs and came out with 10. We ended up co-writing three songs with Dave Cobb and the band — including the new track, Crazy Times.”

In support of the album release, Sammy Hagar & The Circle hit the road in June with the 21-city Crazy Times U.S. amphitheater tour. Fans and critics have been raving about the new songs, which have found their way into their explosive greatest hits-heavy setlist. Following the tour wrap on October 1st in Sacramento, California, Hagar will celebrate his 75th birthday at his annual week of Birthday Bash concerts at his Cabo Wabo Cantina in Cabo San Lucas, Mexico.

Hagar remains committed to social advocacy and philanthropy through his Hagar Family Foundation. For more than a decade, the foundation uses music and Sammy’s entrepreneur endeavors as a means to give back to causes special to him and his family; mainly food pantries and children’s music and health related causes. To date, they have supported these causes with personal contributions of more than $4 million.

For more than five decades, Hagar has been recognized as one of the best and most accomplished lead singers and songwriters in rock music. From breaking into the industry with the seminal hard rock band Montrose, to his multi-platinum solo career, to his ride as the frontman of Van Halen, Chickenfoot and his latest best-selling supergroup, The Circle, Hagar has amassed 25 platinum albums on sales surpassing 50 million worldwide. Along his journey, he has set the tone for some of the greatest rock anthems ever written with songs like I Can’t Drive 55, Right Now and Why Can’t This Be Love, and earned the highest respect of the music industry with a Grammy Award and induction into the Rock And Roll Hall Of Fame. Since launching his flagship Cabo Wabo Cantina in 1990, he’s turned a lifelong passion for great food, music and spirits into a thriving and iconic lifestyle brand. A pioneer in the spirits industry, Hagar’s development and nine-figure sale of his Cabo Wabo Tequila to Gruppo Campari in 2008 is widely credited as the start of the celebrity-owned spirits trend. His portfolio of spirits now includes Sammy’s Beach Bar Rum, Santo Tequila and Sammy’s Beach Bar Cocktail Co., as well as several restaurants. Never one to hit the brakes, he’s also found success in publishing, TV, radio and beyond, including five seasons of his hit TV show Rock & Roll Road Trip with Sammy Hagar and as host of Sammy Hagar’s Top Rock Countdown, his syndicated radio show that’s broadcast on over 90 U.S. stations. He’s also a New York Times bestselling author, a dedicated philanthropist and since January 5th, 2022, the first Honorary Ambassador to Los Cabos, an honor he was bestowed in recognition of his longtime investment in the people and economy of Mexico.