GUITARIST NITA STRAUSS ON WORKING FOR PAUL STANLEY AND GENE SIMMONS, “THEY WERE VERY NICE TO WORK FOR” 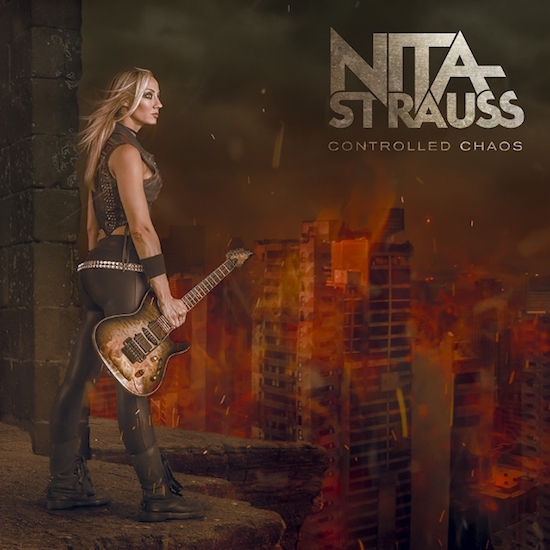 Ruben Mosqueda of KNAC.com spoke with guitarist Nita Strauss (The Iron Maidens, Alice Cooper), excerpts from the interview appear below.

KNAC.com: You’re about to release your first ever solo album Controlled Chaos on November 16th. It’s an instrumental album, what sets your record apart from others?

Strauss: It’s been a process to get this album together. It’s been a long time in the making but this is the album that I’ve always wanted to release. I can say this: this is the album that I envisioned, that I would release since I started playing guitar. All my musical heroes have been guitarists, [Steve] Vai, [Joe] Satriani, Paul Gilbert, Yngwie Malmsteen, I’ve always wanted to make an album that followed in their footsteps. It took a long time to put together Controlled Chaos because of my amazing day job, playing in the Alice Cooper band.

When Alice took some time to do some touring with The Hollywood Vampires, I took full advantage of the time to work on this record and make it a reality. I wanted to make an instrumental album. I guess I could have made an album with singing on it, but that wasn’t what I wanted. I wanted to make record where the songs spoke to you through my playing. I think I achieved just that, I’m really proud of this album. I really wanted this album to showcase what I can do and that is play guitar.

KNAC.com: You performed during the the now defunct AFL home games for the “L.A. KISS.” How many people auditioned for that gig?

KNAC.com: And what was it like to have Gene Simmons and Paul Stanley as your employers?

Strauss: I didn’t work directly with them, though I was little star struck the first time I met them. I mainly worked through the talent department,…but they were very nice to work for. When I was leaving and the last half of the season, I had a great conversation with Paul. I had just landed the Alice Cooper tour and had to make a decision to do one thing or the other. I had to let them know I was having to leave but I had a good reason! [laughs] This was the Motley Crue farewell tour with Alice Cooper supporting. Gene and Paul were extremely understanding. On the last day, Paul pulled me aside and said, “Listen, if we have to lose you to anyone, I’m glad it was the Alice Cooper organization because they are going to treat you really well.” I have a lot of respect for him because of that. He didn’t have to do that, but he did and that was really, really cool of him.

KNAC.com: You were part of The Iron Maidens for a few years. How big of a Maiden fan were you going into that band?

Strauss: Yeah, the band just celebrated their 17th anniversary, can you believe it? Oh, it was so much fun playing in that band. I joined them the year they celebrated their 10 year anniversary. Before I joined I remember that you couldn’t go anywhere and not see these posters promoting gigs with these five badass girls on them. The had a loyal following even early on because of their ability to perform the songs and their stage show. They had the full stage show with screens, and their own ‘Eddie.’ They were legendary even back then, but to play with them from 2011 to 2014 was an amazing musical education. I got a chance to cut my teeth from day one. I went on tour and played a bunch of shows, I got used to being on stage and dealing with mishaps. Anything that can go wrong will and I learned how to deal with that.