GUITARIST GEORGE LYNCH DISCUSSES LYNCH MOB’S NEW ALBUM, DOKKEN, AND WHEN WRITING MUSIC, WHO HAS BEEN HIS FAVORITE VOCALIST 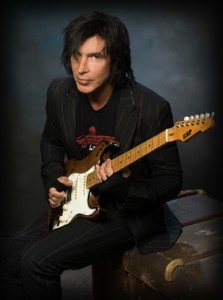 George Lynch: I think we retained the core aspects of the Lynch Mob formula, if there is such a thing: sort of a blues-based desert rock, with an exotic tinge to it. And we always work off that foundation when we’re writing and push out the envelope a little bit – veer off into different areas. I think Rebel is probably the most ambitious record we’ve done, in the sense that we pushed the limits.

I’m not saying that it’s “genre busting” or anything like that – it’s a hard rock record. But I’m very proud of Oni [Logan, Lynch Mob vocalist] and myself, because we were able to stretch out a little bit. I always like to challenge ourselves, without abandoning who we are.

Songfacts: How would you compare the songwriting process in Lynch Mob to Dokken?

George: The process isn’t much different, but the results and the chemistry are different. I subconsciously internalize who I’m playing with and who I’m surrounding myself with. When I’m playing with Dokken, I’m aware who is going to be singing this material, the parameters I’m working in, with how we’re constructing songs, and stylistically what they’re going to be.

With Oni, I know it’s going to be more soul and R&B flavored, and try to give it a little twist. With the Dokken stuff, it’s going to be a little more straight ahead, and a little bit “whiter,” for lack of a better way to describe it. And the same with writing for the Sweet & Lynch record [2015’s Only to Rise] – it’s really identical to the Dokken writing sessions, in that both singers are in the same camp, the same world, the same universe, and I write accordingly.

Songfacts: Out of all the singers you’ve worked with over the years, is there one that is the easiest to work with, or whose voice is closest to the one you hear in your head when you’re writing a song?

George: No, I don’t have a favorite, if that’s what you’re asking me – or anything closest to what I envision. All the singers I’ve worked with have aspects of maybe my “ideal singer,” but I never played with one that had all the components of the ideal vocalist. It’s maybe why I play in all different kind of situations.

For instance, I’m recording a record right now with a project called the Infidels, and the singer is Angelo Moore-the singer from Fishbone. That is something that is way out of my wheelhouse, and it’s fantastic. He’s doing things that I would never have imagined myself doing.

When I sit here and I talk to you and I talk about pushing the envelope with the Lynch Mob, I realize how much I neglected myself and avoiding areas of music that I should have been involved in – from punk to salsa to calypso to reggae and all these different influences that this guy [Moore] is bringing to the table. It’s a learning process, really. I’d rather play with somebody who is influenced in a way that forces me to stretch a little bit.

Songfacts: What do you remember about the writing of the Dokken song, Mr. Scary?

George: That was originally intended to have vocals on it. I tried to write this heavier track – all the Dokken records had to have this balance: a ballad, a mid-tempo song, a fast song or two. And a heavy song balanced the light. We intended on Don to sing on it, but he just wasn’t feeling it, which I can understand – you can’t really sing over that song in retrospect. So instrumentalizing it was an afterthought.

We were just sitting there, and it was a really cool track, but it’s either do that, or it wasn’t going to make the cut on the record. So I spent all night in… I can’t remember the name of the studio [Total Access Recording], but it was in Redondo Beach, and literally staying up all night tracking it. And it was one of the more memorable tracking sessions ever in my life, because it was so magical – all that stuff just happened. And it says something about songwriting: when you have a larger inspiration, it really takes it over the edge and pushes it to the next level.

Songfacts: What other Dokken tracks do you remember having a large part in writing?

George: When Heaven Comes Down. I remember writing that. I had a little area in my house which Jeff [Pilson, Dokken’s then-bassist] and I had boarded off and we locked ourselves in there, and it was one of those sessions. Actually, Jeff had to leave, and I just stayed awake all night and started getting into writing the lyrics, and I had a melody in my head for the chorus.

So I got my sh–ty little plastic mic and plugged it into an Octavider and some echo, into a Fostex 4-track cassette recorder, and I recorded it.

The sun was coming up, and I was singing really low, because I didn’t have a lot of range. I’m a lousy singer, and I put all these effects on there – I put an Octavider and delay. I basically put all my effects on the mic! I wish I still had that recording.

Rebel is out today (August 21st) through Frontiers Music SRL. To listen to songs from the album, click on the highlighted song titles.