GUITARIST DAVE “THE SNAKE” SABO ON SKID ROW’S “SUBHUMAN RACE,” THAT RECORD [IS] THE SOUND OF A BAND BREAKING, [OR BEING PULLED] APART” 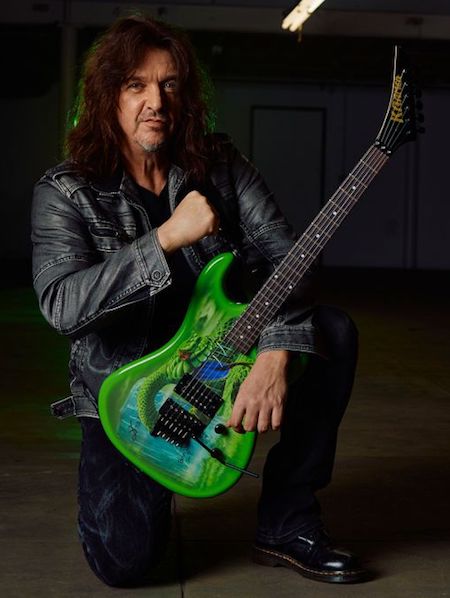 Andrew Daly of Guitar World spoke with Skid Row guitarist, and founding member, Dave “The Snake Sabo, highlights from the interview appear below.

Guitar World: Listening to The Gang’s All Here, for the first time in a long time, it feels as if Skid Row is firing on all cylinders.

Snake Sabo: Absolutely. This record is about us being reintroduced to ourselves, and a lot of credit goes to our producer Nick Raskulinecz; he was and is just [an] incredible force. He’s an amazing producer, a great musician, and a great songwriter. We could not have done this without Nick because, like I said, he made the process of reintroducing Skid Row to Skid Row possible.

He was able to do that because, first and foremost, he’s a fan. He knows our music, he’s seen us live a bunch of times, and he felt that after 35 years of making music, we had gotten far away from what we were back in the day. And while that happened naturally, we still have that fire that burns like we did when we were teenagers, so it was a case of guiding us back to the essence of what Skid Row is.

Life happens, but there’s still that 16-year-old kid within you who wants to stand in front of a mirror with your guitar, pretending to be Ace Frehley.

Guitar World: How important has [singer] Erik Grönwall been to the revitalization of Skid Row?

Snake Sabo: Man, Erik has been huge. His sound, his look, and his vibe are exactly what we needed and very much in keeping with Skid Row. And he’s got an incredible story of his own; through that, he’s grown into an absolute beast of a singer.

With his positivity, electricity, humility, and gratitude, I cannot say enough good things about Erik and what he’s meant to this band since he joined. He is one of the coolest people I’ve ever met, and he fits in like he’s been with us for decades. But Erik’s talent and work ethic are fierce, man, so much so that he finished eight of the 10 tracks while he was still in Sweden before we even got in a room with him.

We were in a tough spot because when ZP [Theart] was still in the band, we were all dividing apart, but we kept hoping we could come back together, but it wasn’t happening. We had different philosophies, wants, and needs, and there was no animosity or blowout arguments; it was just time to part ways.

So, Erik coming on and being to do what he has, in many ways, saved this whole thing for us. I don’t know what we’d have done without him, with the residency we had with the Scorpions, or with this record.

And the very first time he took the stage with us, which was basically the first time we had seen him in person as a member of Skid Row, he hit the stage, started singing, and I was just like, ‘Holy f–king shit, dude, this is f–king awesome.’

Guitar World: Invariably, people will compare Erik to Sebastian Bach. Would you go as far as to say that Skid Row is stronger now than in its heyday?

Snake Sabo: People will compare, and we hear people calling for reunions all the time, but there’s no need. Even before Erik, we never felt a need to go there. Things happened the way they did, and things had gotten very toxic by the end of a certain period in our history.

I do think Skid Row is stronger now than ever before. Erik can hit all the notes from those early albums and does it effortlessly. He’s got a ton of energy, and for us to sit here and watch him perform, man, it’s a pleasure. I couldn’t ask for anything better than what Erik has given us, and I wouldn’t trade it for anyone from the past.

Guitar World: When you look back on Skid Row’s first two records, what do you feel has allowed them to endure the way they have?

Snake Sabo: We were on absolute f–king fire. We had a clear mission. We were extremely motivated and ambitious, and it was authentic, dude. You’ll hear people who talk about the difference between our first and second record and how Slave to the Grind is heavier, and yeah, that was on purpose.

Between the first and second records, we had grown as a band and had become a lot more aggressive when we played live, and we wanted to reflect that. We had started building a reputation as a formidable live band that hit the stage and jammed f–king hard. We really put on the show, and I think that that aggression led to the creation of the next record.

And we had lived a lot of life between the creation of the first and second record, and there was nothing forced; we felt those riffs and lyrics started coming out the way they were coming out. It all felt very natural, like the correct next step. The authenticity of those records and the reflection of who we were as a band is why those records live on. They’re real, and our fans picked up on that and never let go.

Guitar World: I’d argue that Skid Row was never heavier than on Subhuman Race. Was that a natural progression as well?

Snake Sabo: Well, there was a lot of angst in the band, and the cracks in the veneer were showing themselves prevalently. Rachel and I often refer to that record as the sound of a band breaking apart or being pulled apart, if you will. I’m surprised that Subhuman Race even got made because of all the s–t happening.

And I like that record; I think musically, there’s some cool stuff on there – I’m just shocked that we were able to do it. There was a lot of infighting, disagreements, and ego killing the band, and also, the climate was changing; musically, you could feel it.

And I also think that we probably needed a longer break from each other. But then again, if we had taken a longer break, maybe that would have been the end of the band. Who knows? But that record was a struggle to make, and it shows in the sound of it. So, it was natural, but not the same as we saw with the first two records.

Guitar World: Was there ever a time when you thought Skid Row might not survive?

Snake Sabo: Right after the Subhuman Race Tour, we said goodbye to a few band members. And after that, Rachel, Scotti and I all went our separate ways because we needed some time to repair our friendships. We had to do that because there was a lot of what I’ll call poisonous rhetoric flying around the confines of our tour bus.

We got to a point where we hated taking the stage together, but we did it because, at the end of the day, we loved the music and wanted to play those songs. And so, when everything fell apart between ’96 and ’98, we had to take a break from each other.

But over time, Rachel, Scotti and I slowly realized that we’re brothers and loved each other, and although we might not have wanted to play in the band with certain people, we did want to continue to play the songs that we wrote.

So, we said, ‘You know what, let’s go out, get a couple of new guys, and see what happens.’ We knew it would be different and take some time, but that didn’t matter to us; we said, ‘Fine. We’ll start at the bottom; it’s okay.’ We were okay with that because of the love we have for our songs and the love Rachel, Scotti, and I share, which we knew was the core of Skid Row.

We set out to find the guys who could be a part of it and who could keep the legacy moving forward, for better or worse. We always said, ‘When it’s not fun, that’s when we need to either make changes or walk away.’

So, there was a time when we needed to walk away, but the love of the music brought us back together. But not everyone would be a part of that, and we’ve never felt like we needed to look back. Having said that, we have this lineup with Erik and [drummer] Rob Hammersmith that’s made this all possible, and we’re so excited to be back where we belong.

Skid Row’s latest album, The Gang’s All Here, was released on September 28th.