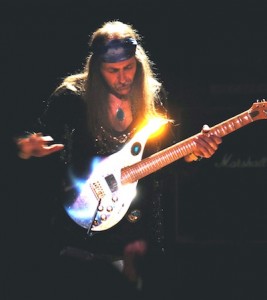 Roth says, “I’m really looking forward to this tour and I’m sure that between the three of us – and the audience – sparks will fly. We will all play our own separate sets first and then play some pieces together, which should be great fun.”

He adds, “My own set will be drawn from a combination of all my albums, including the latest Scorpions Revisited and Transcendental Sky Guitar, but I will also emphasize some Electric Sun songs which I haven’t played live for over 30 years and which I feel deserve to be heard again. This is in order to celebrate the 35 year anniversary of the release of the first Electric Sun album, Earthquake.”

The trio will also play an acoustic set for VIP ticket holders prior to the main show, where they’ll perform a different selection of songs from the later set.

Roth continues, “In that context, you are also going to be able to be present at an onstage rehearsal of some of my new songs for the next album. This is an unusual idea, but I always felt that songs are benefiting greatly from being played in front of a live audience before actually recording them. I am sure that this will help us to galvanize things and to fully crystallize the new material that I have written.”

‹ KIX FRONTMAN STEVE WHITEMAN ON THE BAND PUTTING OUT NEW MUSIC, “WE WOULD LOVE TO DO IT, BUT IT’S GOT TO MAKE SENSE”