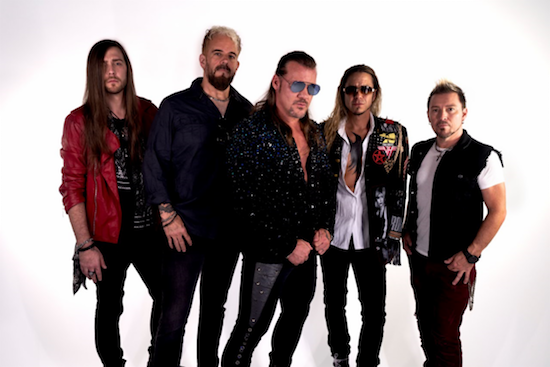 Fozzy announces rescheduled Save The World Tour starting July 10th in Columbus, OH and ending on September 5th in Orlando, FL. Due to the growing concerns of the coronavirus (COVID-19) pandemic and willingness to comply with CDC and government regulations, Fozzy realized it was necessary to reschedule their headline tour, originally scheduled from April 16th-May 9th, out of necessity to keep fans safe and healthy. With that said, Fozzy is excited to hit the road again this summer and will be joined by support from Through Fire, Royal Bliss, Black Satellite (8/20-8/30), and Zero Theorem (7/10-8/8). For more information on upcoming tour dates and to purchase tickets, visit the band’s website here.

“In light of the pandemic that’s gripping the world’s attention, it’s time to make the right move and postpone the April/May leg of Save The World Tour for everyone’s safety and well being. However, we promise you, once the World is back on its axis and TRULY saved, Fozzy will be back to hold you in our loving arms and literally ROCK all your troubles away. See everybody soon and in the meantime and between time, please stay healthy and safe. We will get through this together,” states Fozzy frontman Chris Jericho.

Fozzy is gearing up to release their new full-length album 2020 this fall. The album features the band’s newest hit song Nowhere To Run, which recently hit Top 10 on the Rock Radio Chart. The song is the band’s third track to hit Top 10 on Rock Radio, following Judas and Painless. Listen to the anthem here and stay tuned for more details about the forthcoming release soon.

The band’s seventh LP, Judas, spurred hits like Painless, Burn Me Out, and title track, Judas, which spent five weeks at #1 on the Big Uns Countdown on Sirius/XM’s Octane channel and peaked at #5 on the Active Rock Mediabase Chart. The song has over 34 million U.S. streams to date and the music video has over 36 million views to date. Watch the music video here.

All show and VIP information is available here: https://www.fozzyrock.com/fozzy/.

‹ JON BON JOVI SAYS NEW ALBUM, “2020” WILL BE HAVING ITS RELASE DATE PUSHED BACK