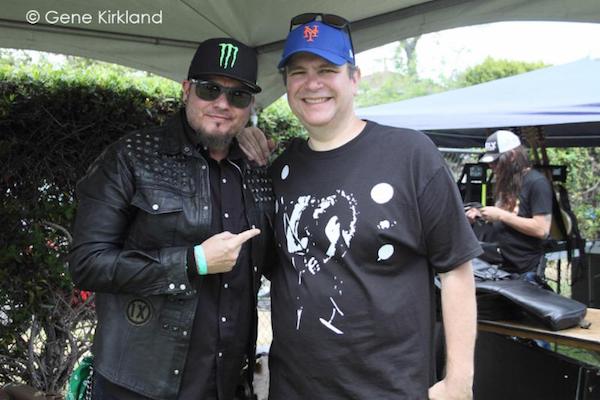 As some 300 motorcycle riders and passengers arrived at Los Encinos Park on Sunday, May 6th after completing the motorcycle ride from Harley Davidson in Glendale, a rainbow appeared in the sunny, blue, but cloudy sky. Rainbows have long been associated with Ronnie James Dio and his music, and the colorful presence seemed to signal the late singer’s approval of the event created in his memory.

The bands held Meet and Greets for fans during the course of the afternoon, and a raffle and music memorabilia heavy silent auction brought in additional donations. The silent auction included an Elton John Tour Program, a signed Heavy Metal Hall of Fame poster, a KISS Waffle Maker and a full Pantera discography on vinyl among many other items.

Wendy Dio and Dio Cancer Fund Medical Director Dr. Sandy Kapoor presented a check for $25,000 to Dr. David Wong of the UCLA School of Dentistry to further his team’s research into the development of a simple, non-invasive saliva test for the early detection of cancer. Dr. Wong surprised the crowd with the news that an early form of this test will be available some time this summer.