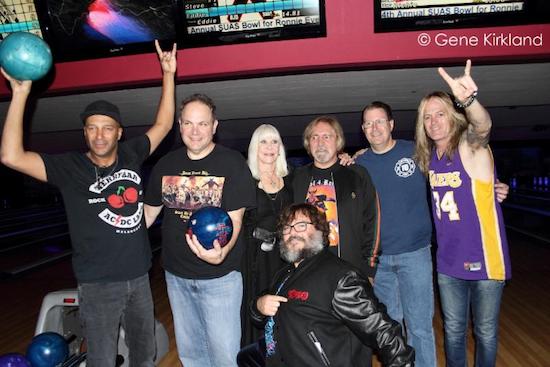 The Fourth Annual Bowl For Ronnie Celebrity Bowling Tournament, benefiting the Ronnie James Dio Stand Up and Shout Cancer Fund held on October 25th, 2018 at Pinz Bowling Center in Studio City, California was once again sold out in advance. This year’s event brought in $74,000 for the music-based organization that has been raising awareness and much-needed funding for cancer research since 2010.

Over 300 rockers, bowling enthusiasts, DIO fans and Dio Cancer Fund supporters made up the capacity crowd with the event hosted by broadcast personality Eddie Trunk, who is heard on SiriusXM’s Volume channel and whose TV series TrunkFest airs on AXS-TV.

The Dio Cancer Fund presented a check for $61,000 to Dr. David Wong and his research team from the Dental Research Institute at the University of California, Los Angeles where they are developing a non-invasive saliva test for early cancer detection. This money will fund the gastric cancer research of team member Dr. Karolina Kaczor-Urbanowicz for the coming year. Dr. Wong believes this simple test will receive FDA approval and become available for medical use within the next two years. Information about Dr. Wong’s research is available here.

2018 Bowl For Ronnie winners are as follows: