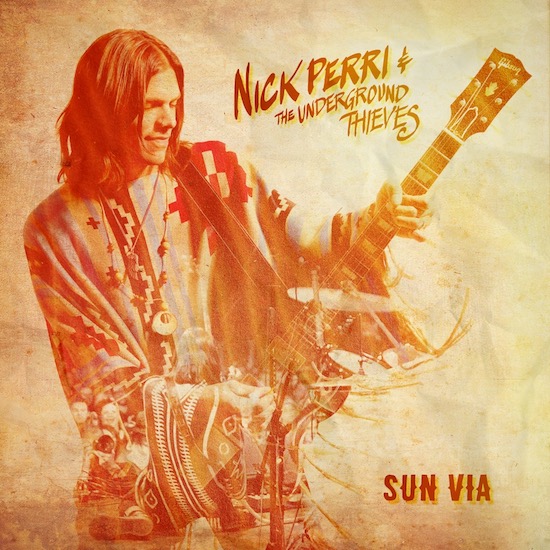 Nick Perri & The Underground Thieves, a Philadelphia-based rock band led by artist/songwriter/producer Nick Perri, announced a pre-order today for the group’s anticipated debut album, Sun Via. Along with the pre-order, the group released the LP’s first single, Feeling Good.

Recorded and produced by Perri, Sun Via is comprised of 10 original songs—a cohesive mix of rock-, alternative-, Americana-, and psychedelia-infused tracks.

Sun Via follows two-and-a-half years of momentum for Perri’s band, during which the group released various singles and music videos, delivered standout performances as support for The Struts and Slash ft. Myles Kennedy & The Conspirators, and earned national and international acclaim. Classic Rock Magazine/LouderSound.com named Nick Perri & The Underground Thieves one of the “20 great bands to shake up the 2020s.”

“Sun Via is a labor of love—I gave it everything I had to give,” said Perri. “It was a long process, and I believe the songs and sounds reflect that effort. I’m very proud of the album top-to-bottom, and I’m excited to finally share it.”

Feeling Good features Perri on lead vocals and guitar, Justin DiFebbo on Hammond organ and synthesizer, Brian Weaver on bass, Anthony Montesano and Michael Montesano on backing vocals, and Zil Fessler on drums—all of whom originate from Philadelphia.

“Back when I wrote Feeling Good, I wanted to sing about being grateful for what you have and not relying on material goods for happiness,” said Perri, who—embracing his roots—delivers a hook-filled chorus and minute-long guitar solo in the track. “In light of this current year, however, I believe the song can take on further meaning and purpose. At the end of the day, I hope Feeling Good can inspire and uplift listeners. I think spreading positivity, especially during a time like this, is important.”

Vinyl and CD copies of Sun Via are now available for pre-order here and also available on all streaming platforms. Sun Via’s official release date is set for August 14th.

‹ DEE SNIDER RELEASES VIDEO FOR THE LIVE VERSION OF “I AM THE HURRICANE,” “FOR THE LOVE OF METAL LIVE” ALBUM, DVD& BLU-RAY OUT JULY 31ST