FORMER L.A. GUNS GUITARIST MICHAEL GRANT DISCUSSES HIS NEW ALBUM, “ALWAYS THE VILLAIN” AND HIS DEPARTURE FROM THE BAND STATING, “I GOT THE SENSE THAT THERE WERE THESE JEALOUS INSTANCES” 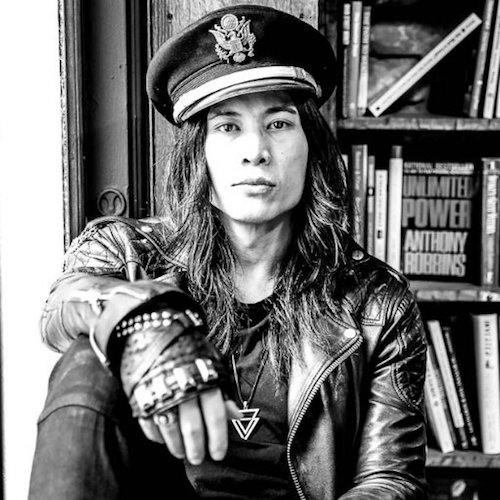 Ruben Mosqueda of Sleaze Roxx spoke with former L.A. Guns guitarist Michael Grant about his new album, Always The Villain, due out July 10th on Frontiers Records. Highlights from the interview appear below.

Sleaze Roxx: I was listening to Eddie Trunk’s show. It must have been two years ago now. You premiered a song. You had just parted with L.A. Guns. You were gearing up to get your band launched. Why has it taken this much time?

Michael Grant: It was two years ago, you’re right. At the time, I was still shopping for a label. It was a pretty tumultuous and life changing time for me, after breaking it off with L.A. Guns. It was a tough time [as] I had to move, a break-up and a bunch of other stuff happening at the same time. I didn’t have a label and when I did find one, the negotiation of a contract happened at a very slow pace. All of these things resulted in the delay of the album. There was a moment where I lost inspiration, but then I found it again, then I banged it out.

Sleaze Roxx: In the past two years, I imagine you’ve written and recorded songs that you’ve added and subtracted from the vision of what ultimately would make the album. You must have a wealth of tunes in the archives.

Michael Grant: Absolutely. There’s a nice catalog of songs archived from these songwriting sessions. There’s a chance I might revisit a song or two from these sessions, but I’m a huge fan of writing for the now. If I run out of inspiration, I might dig into those archives at some point. Generally, I keep the creativity flowing and keep it in the now.

Sleaze Roxx: You played on the pool stage on the 2019 Monsters of Rock Cruise. How was that for you? You had Jimmy D’Anda of the BulletBoys on drums for that.

Michael Grant: Right, the night before the cruise some things changed and Jimmy graciously offered to play with us and we had one rehearsal before the cruise set sail. I think we had about 90 minutes of rehearsal. We were excited, but definitely a little anxious because we only had one rehearsal. Jimmy displayed the highest level of professionalism and don’t tell him this but he actually made us sound better [laughs]!

Sleaze Roxx: I think it’s safe to say that most of [the band members of] L.A. Guns were disappointed when you parted ways with the band.

Michael Grant: Thanks. Thinking back now, I think it was time. The truth is I think regardless of whether it happened then or now, it was going to be the outcome. The way certain members of the band decided to handle the situation wasn’t cool. In the grand scheme of things, it had to happen. Unfortunately, it happened the way that it did.

Sleaze Roxx: Did you have some fair warning that it was coming or were your sideswiped by it all?

Michael Grant: I had an internal fair warning. I felt it. I got the sense that there were these jealous instances. Things started to escalate. I could feel the jealousy. It was like a ticking time bomb. Toward the end, I just didn’t give a f–k anymore. There was just some weirdness between other members and I. There were things that would displease certain members and I just didn’t care anymore. When you’re constantly getting muted and turned down, it’s time to do your own thing. Even me doing my own thing was too threatening in the end.

Sleaze Roxx: When you performed [Prince’s] Purple Rain with L.A. Guns, it was well received and became a highlight of the show. How did that originally get added to the set?

Michael Grant: I’m a huge Prince fan, especially Purple Rain. That was one of those albums that changed my life. At the time, Prince had just died and the O.G.’s [Tracii Guns and Phil Lewis] of L.A. Guns decided they needed to take a break during the set so they could make some costume changes, grab a drink or smoke or whatever. It was meant to be a filler during the set, while the guys took a break. The first night I did, it was so well received. I recall there were people shouting it at the top of their lungs from the balcony. We did that a few times but over time, it became a staple in the set, which some [in the band] people hated, but it was one of those things that I didn’t want to do in the first place. I was asked to fill five to seven minutes in the set and it was even suggested that I could do an Endeverafter song, but I didn’t want to do that. This isn’t Endeverafter, this was L.A. Guns. I don’t need that kind of tip of that hat cutting into your legacy. Purple Rain was perfect because I wanted to honor him, it took off and it ultimately resulted in my departure from L.A. Guns.

Sleaze Roxx: So it stirred up some resentment, because it was meant as a filler and it grew legs?

Sleaze Roxx: You came on board on The Missing Peace. How did you get approached about that?

Michael Grant: Tracii [Guns] said they were going to release new music together around the same time that I joined the band. I was asked if I had any song ideas to contribute for this new album that they were talking about releasing. I wrote Don’t Bring A Knife To A Gunfight and The Devil Made Me Do It, both made it on the album and The Devil Made Me Do It opened the show. That was an awesome experience. The recording of the album was us passing files amongst the band members, not old school in any way. It was really “piecey” or should I say “missing piecey” [laughs]?

Sleaze Roxx: As far as music from “The Assassins, is it incorrect to say that the music is modern punk meets power pop meets hard rock? I hear all of that on the album.

Michael Grant: I think you’re hitting it on the head. There’s elements of all of that and other stuff of course. It’s a culmination of all or a lot of my influences. I like to call it “voodoo stew” [laughs]! I didn’t want to create an album that was “one dimensional” and I think I achieved that.

Sleaze Roxx: What is the significance of the album title?

Michael Grant: At the time that the title was conceived, the L.A. Guns break-up had taken place. I was being portrayed as being this “monster” and there was all this negativity being said about me, via social media and in the press. That was so far off the mark, but when people have a platform like that, people listen and they get sold all this bulls–t. I was a victim of all of that bulls–t. I think that sparked the rebellious part in me because I was being attacked by inaccuracies. It was like “Okay, you want a villain? I’ll give the baddest villain that you’ve ever seen!” The title is all encompassing of where I was at that time and where those songs came from.

Read more to at Sleaze Roxx.

To listen to Michael Grant & The Assassins first single, Red Light Run, click here. Listen to the band’s new release, Anthem of Us, below.