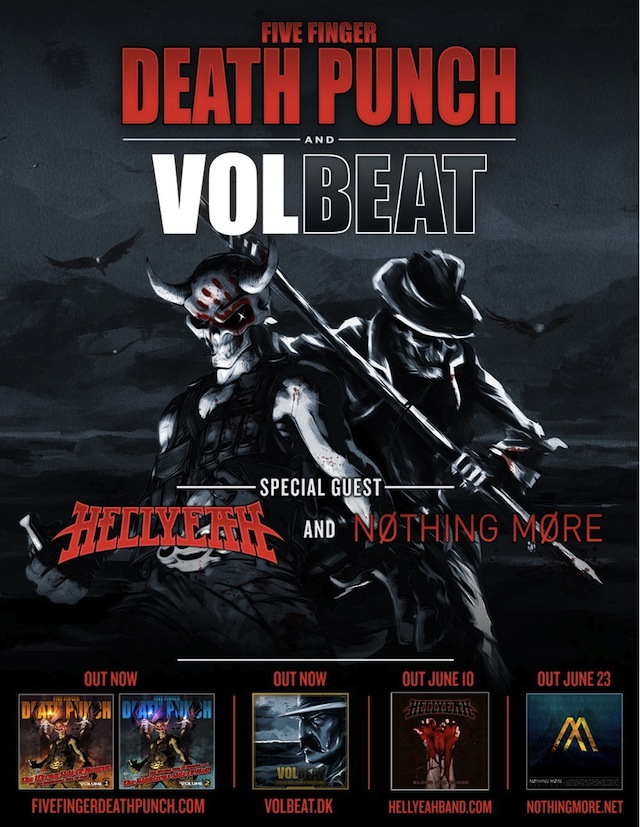 Five Finger Death Punch and Volbeat announced today (5/6) on their Facebook pages that they’ve joined forces to bring fans one of the biggest rock tours of the year produced by Frank Productions/NS2. Special guests on the tour will be Hellyeah and Noting More. Fred Frank, President of FRANK PRODUCTIONS offers: “We are excited to put two of the globally most relevant and hottest bands of the genre into major arenas across the country to bring fans an amazing night with 4 bands on the bill at a great value”.

The co-headlining arena tour across North America (itinerary below) will kick off on September 16th at the Maverik Center in Salt Lake City, UT and run through October with the final performance taking place at The Joint at Hard Rock Hotel & Casino in Las Vegas, NV. Tickets go on sale this Friday, May 9th and Saturday, May 10th at 10am local time. Pre-sales start tomorrow (May 7th) at 10am local time. For tickets go to www.fivefingerdeathpunch.com or www.vobeat.dk. For 5FDP VIP experience info go to tickets.artistarena.com. Also, several additional show dates will be announced on June 3rd. In honor of the announcement, both headliners will feature huge sweepstakes on their Facebook pages where fans can enter to win grand prizes such as a guitar signed by all bands on the tour, meet & greets with all four bands on the tour, as well as tickets to the shows and many other cool prizes.

Check out 5FDP and Volbeats’s co-headlining tour at the following dates this fall: