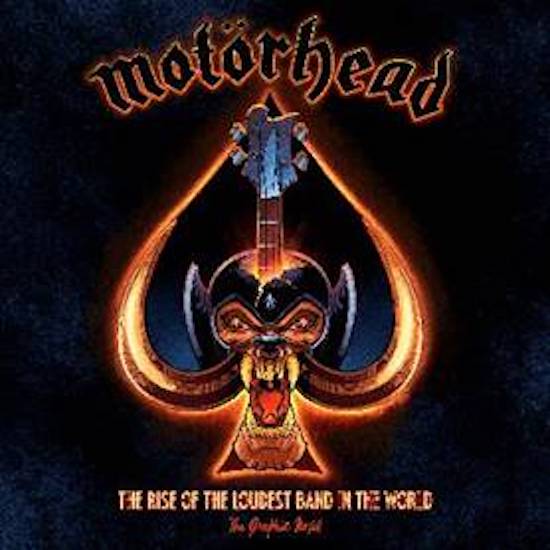 Critically-acclaimed leading publisher of music graphic novels, Fantoons, is set to release their second Motörhead graphic book, the much-anticipated Motörhead : The Rise of the Loudest Band in the World: The Authorized Graphic Novel, available at book retailers nationwide. The graphic novel is available for preorder on Fantoons official site at a list price of $29.99. Fans who purchase in advance will receive a very Lemmy-inspired limited-edition decorative Cereal Box companion when the book releases on September 7th, 2021. Link to preorder here.

“David and the Fantoons team captured Lem’s spirit and vibe perfectly, not to mention the overall spirit of what the band was all about. Their attention to detail was top notch, the art first class and the proof is in the final piece, which is splendid! Readers are sure to feel the raw grittiness that was the origins of Motörhead in each page.”  write the Motörhead Team,

Motörhead : The Rise of the Loudest Band in the World: The Authorized Graphic Novel is a posthumous celebration of one of rock’s most infamous frontman, Lemmy Kilmister, founder and creative juggernaut of Motörhead. The 144-page fully illustrated graphic novel chronicles the first part of the wild 40-year career of one of the most notorious and legendary characters in music history and Motörhead’s meteoric rise to becoming one of the most influential rock bands of all time.

From Lemmy’s early days working at a riding school in the English countryside, to the recording of the band’s iconic album and first major international success, Ace of Spades, this Motörhead graphic novel chronicles the extraordinary story of the famous frontman’s incredible journey as the leader of the “loudest band in the world.”

The graphic novel includes a foreword from Judas Priest front man, Rob Halford – fans will learn more about the band that heavily influenced well-known groups like Metallica, Guns N’ Roses, and Foo Fighters, and discover the fascinating tale of the legend himself, Lemmy Kilmister.