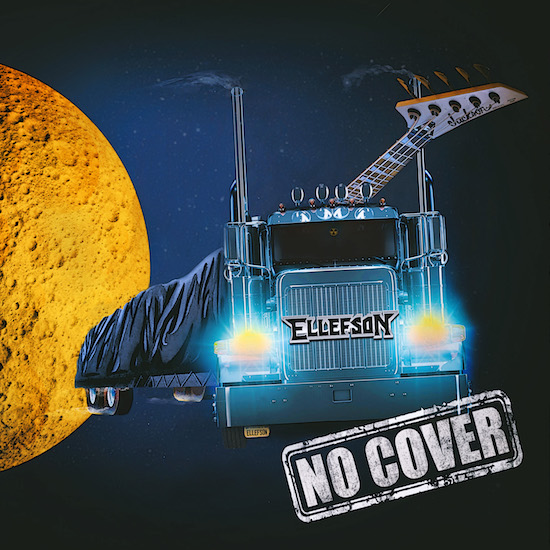 Produced by Ellefson and Hazaert, with guitarist Andy Martongelli, and engineers Alessio Garavello, Matt LaPlant (Nonpoint, Lil’ Jon, Skindred), and John Aquilino, and mixed by Alessio Garavello, Randy Burns, and more, Ellefson describes the process as a collaborative tribute, and a loving homage, to some of his favorite artists.

You can pre-order now on CD LP and Cassette, or in a deluxe bundle with an exclusive T-shirt: here.

“Before any of us started writing our own songs, we all began playing cover songs by our heroes during our formative years as musicians. So, it’s fun to go back in time and revisit those songs which helped us to become the artists we are today, especially when, ironically, many of those artists have now become peers and friends. During the process of recording some covers for B-Sides and bonus tracks for the upcoming Ellefson solo LP, Thom and I just said, ‘This is a blast, let’s just do a whole album of covers.’ Literally, within 2 weeks, we had the songs recorded, and began calling our friends to join us, many of whom we had just performed with on the Mega-Cruise back in October. From there, the album just fell into place.”

He continues, “A lot of our buddies have been playing covers and quarantine jams on the Internet during the pandemic, so this is really just an extension of that, but we took it the next level and actually recorded a full studio album. We’ve been working remotely anyway, as we’re all over the Globe, so it was easy to incorporate some guests jumping in with some outstanding performances of their own. It’s been a really fun nod to making great music with our friends, who are kick-ass players, and many legends in their own right, which is the whole reason we got into this in the first place.”

Says vocalist, and co-producer, Hazaert, “It’s all songs and artists that really mutually influenced both myself and David, especially a lot of early ‘Metal’ and harder Classic Rock. Some stuff I picked, some stuff he picked, but for the most part it was all artists that we both loved. What’s funny, as there’s a bit of an age gap, we were sometimes more influenced by different eras of the same bands. But it was really him saying, ‘Let’s do this song,’ and me saying, ‘Yes, and let’s do this song.” And before we knew it, we had over 15 songs. And it’s a lot of album tracks, deep cuts, early tracks, stuff people might not expect, which was what was so fun.”

He adds, “It was also great that we were able to work in a lot of nods to David’s history, getting Chuck Behler to play with us, bringing in original Megadeth guitarist Greg Handevidt to play on Love Me Like A Reptile, a song they used to play in cover bands together before they moved to LA (which we wrote about in More Life With Deth), and Randy Burns is going to mix a track or two. As a singer, these are literally bands I’ve listened to, and covered all my life, and for me, getting to play with Eddie Ojeda, the Tesla guys, Charlie Benante, Jason McMaster, Mark Slaughter, etc, and sing these songs that mean so much to me. I mean, literally, the entire record is my bucket list of people I’d love to play with, and some of my favorite bands. So, it’s truly an honor to put together something so fun, and really as effortless as this was. It truly is a love letter to Rock N’ Roll, an homage to what made us, musically, who we are today.”

Ellefson and Hazaert followed up the release of Sleeping Giants with an extensive US and European Tour dubbed More Life With Deth, with Hatchet guitarist Clayton Cagle, as well as Flotsam and Jetsam’s Steve Conley, stepping in on second guitar in the US, including several now legendary shows featuring Megadeth alumni Chuck Behler and Chris Poland.

That tour also included a performance on Megadeth’s Megacruise, where Ellefson and Hazaert, along with Opus and Dave Sharpe of Dead By Wednesday, and Clayton Cagle of Hatchet, performed a special Megadeth Mega-Jam set, as a tribute to Dave Mustaine, with guests including Megadeth’s Kiko Loureiro and Dirk Verbeuren.

Ellefson and Hazaert (DE and TH) also participated in another noted highlight of the Megacruise, coordinating an all-star KISS jam, which, in addition to Ellefson, featured Frank Bello, Charlie Benante, and Scott Ian of Anthrax, Clayton Cagle of Hatchet, plus members of Hellyeah, Butcher Babies, Queensryche, Suicidal Tendencies, and more, where Hazaert shared vocal duties on God of Thunder with Chuck Billy of Testament, and God Gave Rock And Roll To You with the legendary Doro Pesch, as well as participating in the epic finale of Rock And Roll All Nite.

The European More Live With Deth tour saw the permanent addition of guitarist Andy Martongelli and drummer Paolo Caridi into the recording lineup, as well as the return of Bumblefoot to the fold, and Ellefson was born. March 2020 brought the release of the hit single Simple Truth, which was premiered on SiriusXM by Eddie Trunk, followed in May by the release of their re-imagined Post Malone cover Over Now, both of which garnered national airplay, (Over Now currently in its 4th week on the Billboard Rock charts), garnering spins and coverage on nationally syndicated radio and major press outlets.

DON DOKKEN DISCUSSES HIS FORTHCOMING RELEASE “THE LOST SONGS: 1978-1981” AND THE CLASSIC LINE-UP SAYING, “WHEN YOU’VE GOT TWO ALPHA MALES IN THE BAND, YOU’VE GOT TROUBLE” ›