Eddie Van Halen, one of music’s most inventive and influential guitarists, made a surprise visit to music students at L.A. Unified School District’s Foshay Learning Center on Thursday, December 5th.

Twenty seven aspiring musicians, under the tutelage of Music Director Vincent Womack, were transfixed as Van Halen inspired them to pursue their passion for music by sharing stories about the importance of music in his own life.

After scoring a gift bag of his own, Mr. Womack said, “I am so grateful to you for fueling and inspiring us and raising the ceiling of possibilities for the kids. We will never forget today.”

Van Halen’s visit to the music students was inspired after he attended a fundraising event a few weeks ago for the Mr. Holland’s Opus Foundation where he was first introduced to Foshay’s Musical Director.

Last year, Van Halen donated 75 electric guitars from his personal collection to the Mr. Holland’s Opus Foundation who distributed the guitars to nine schools throughout Los Angeles County. One of the lucky recipients of a guitar, a student named Jose, who was on hand Thursday received a hands on one-on-one lesson from the rock legend who took time to personally teach him the intro to the Van Halen classic “Ain’t Talkin’ ‘Bout Love”.

“The gift of music is yours, no one can take that away no matter what,” Van Halen said to Mr. Womack’s class. He added, “It is not a rich/poor thing nor does it discriminate. If you have a love or even a like for music, go after it, pursue it. Music helps lift your self-esteem, it gave me an identity, kept me out of trouble, gave me goals and the desire to improve. It gave me a life. I am an example of what music can do for someone. What it did for me, it can do for you all. Anything is possible.”

Watch a video from KCBS Channel 2 below. 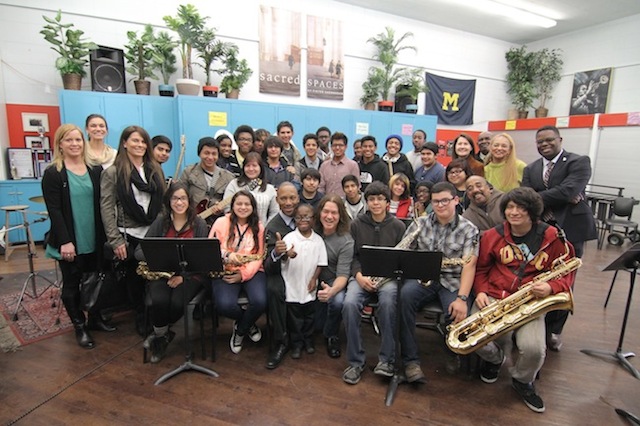 BLACK SABBATH, ANTHRAX, LED ZEPPELIN AND METALLICA ARE ALL NOMINATED FOR GRAMMY AWARDS ›