EDDIE TRUNK ASKS FOO FIGHTERS DRUMMER TAYLOR HAWKINS IF HE WOULD EVER CONSIDER DRUMMING FOR RUSH AFTER NEIL PEART RETIRES, HIS RESPONSE: “YOU KNOW HOW MANY F-KING DORKS WOULD WANNA KICK MY ASS?” 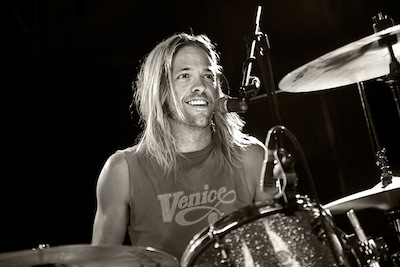 With Neil Peart likely hanging it up for good with Rush and Geddy Lee and Alex Lifeson still interested in playing, there has been the question of whether or not the band will continue and if so, what would the lineup be. During a recent appearance on SiriusXM’s Trunk Nation, Foo Fighters drummer Taylor Hawkins was asked if he might be interested in the position if called upon, and he offered a rather humorous response.

“Dude, I’d get f–king crucified man,” responded Hawkins to Trunk’s query. “You know how many f–king dorks would wanna kick my ass if I tried to be in Rush? It’d be like a nation of dorks chasing me and trying to kill me. YOU’RE NOT NEIL PEART!!! DON’T EVEN THINK ABOUT IT!!!”

Hawkins and his Foo Fighters cohort Dave Grohl inducted Rush into the Rock and Roll Hall of Fame a few years back and even joined the power trio onstage for performances of some of their standout tracks, but Hawkins appears quite happy to enjoy Rush as a fan rather than potentially stepping into a role behind the kit, even if it was hypothetical. Plus, the drummer already has a pretty good job with Foo Fighters that allows him to occasionally step out and do his own music as well.

Before Foo Fighters fire things up again in 2017, Hawkins is getting in a new solo disc titled K.O.T.A. During his appearance on Trunk’s show, he revealed that the title stands for “King of the A–holes.” You can pick up a copy of the six-song K.O.T.A. mini-album over at Hawkins’ website.

METALLICA RELEASE VIDEO FOR “DREAM NO MORE,” BAND WILL SLOWLY RELEASE VIDEOS FOR EVERY SONG FROM “HARDWIRED…TO SELF-DESTRUCT” ›