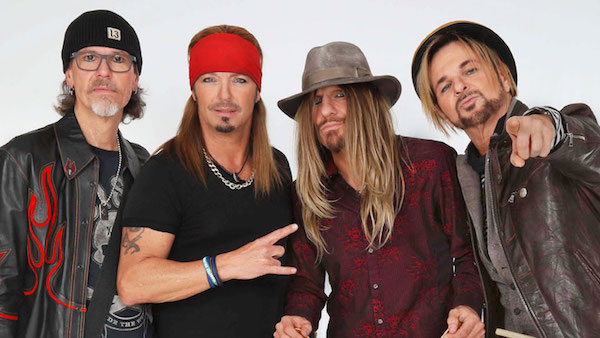 …In the 27 years since, Poison hasn’t turned many critics into fans, but unlike most of their peers – the majority of which now feature lineups with few original members, or worse, compete against themselves (see Great White and Jack Russell’s Great White) – the group’s iconic lineup of Rockett, guitarist C.C. DeVille, bassist Bobby Dall and vocalist Bret Michaels is still intact today.

More important, while other ’80s rock veterans are forced to pound the pavement inside dingy dive bars, smoky casinos and, if they’re lucky, an occasional cruise ship, Poison has managed to maintain a firm grip on the lucrative “summer shed” circuit over the years, on which they play before tens of thousands of fans…

According to [drummer Rikki] Rockett (née Richard Allan Ream), Poison’s longevity can be attributed to their consistency. “When we started, our idea was to create a band that we would like to go see as fans of rock n’ roll,” he says. “We didn’t decide to do this kind of music and have this kind of band because we thought it’d be popular. It really wasn’t popular in 1982. New wave was where it was at. We wanted to create a band that we would want to go see, that we would want to buy into, so we thought about all of it – the songs, the attitude, how we would look, what we would do on stage. The nucleus of that has never changed.”

Still, the band has weathered their fair share of storms over the years. A few months after their 1991 show at Irvine Meadows, DeVille and Michaels got into a fistfight following a disastrous live performance at MTV’s Video Music Awards, after which DeVille left the band for eight years. The group also floundered in the wake of grunge, when record sales of rock acts who weren’t from Seattle shrunk dramatically. By the time the group recorded their fifth album, Crack A Smile, in 1995, their record label didn’t even want to release it. (It eventually surfaced in 2000, after Poison reunited with DeVille for a successful tour.)

During an Atlanta show in 2006, meanwhile, Dall and Michaels fought on stage, allegedly over the group’s set list. Since then, Poison has settled its differences privately – perhaps, Rockett jokes, because he has a black belt in Brazilian jiu-jitsu (“Nobody wants to fight me!”), but also perhaps because the band knows the stakes.

“Nothing good is going to come out of a fight,” Rockett, 56, believes. “If we got in a fight now the way we did back when we were 25 years old, we would just never play together [again]. We all know that. We’d go crawl in our corner, and that would be it – we wouldn’t talk to each other, and that would be the end of Poison. We know that’s not a good option.”

Still, Rockett – an avid motorcyclist, frequent video blogger and father of two – admits that he, DeVille and Dall have harbored some resentment toward Michaels, whose frequent tours as a solo artist led Poison to take a five-year hiatus between 2012 and 2017. “I think we need to get away from each other and do other things, but at the same time, I think he spent a little too much time away,” Rockett says. “There’s definitely some resentment, but not resentment like I want him to fail. I want him to do good. I just want Poison to be important too, and I would like [him] to put a little more energy into Poison.”

To that end, Rockett says he’d like Poison to record new music in the near future, which would mark the group’s first time in the studio together since they recorded nine cover songs for 2007’s Poison’d! The band has not released any original music since 2002’s Hollyweird.

“I personally think we still have a lot of stories to tell,” Rockett says. “Because the music business has changed so much, I don’t know that you’d get a full record out of Poison, but I do believe that you will see new music at some point in some capacity…”

…For now, Rockett promises that Poison’s fans will continue to have nothin’ but a good time at the group’s concerts this summer, which also feature recent Rock And Roll Hall Of Fame inductees Cheap Trick. “If you’re a rock fan who wants to see this kind of high-energy, hooky, fun [music], we’re still your band,” he says. “We’ve never let that go. It’s not like we changed, and all of a sudden we decided we wanted to be U2 and be political or save the world. We’re more interested in saving rock n’ roll, really. I think that’s why we’ve survived – we never gave up the core of who we are.”

Read the whole feature at the OC Weekly.