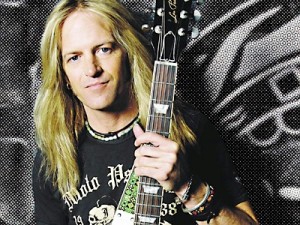 In this in-depth interview below, Heart Of Storm’s Derek Sherinian [keyboardist]and Gregg Bissonette [drummer], Doug Aldrich [lead guitar] and Tony Franklin [The Firm, Jimmy Page, Paul Rodgers] discuss how the show was born, its evolution from premiering in Europe last year in Mayto kicking off its U.S. debut this Friday and Saturday in Los Angeles and what fans can expect when they come to see this one-of-a-kind rock concert and ballet experience.

Q: When did this whole idea for Heart Of Storm evolve from? What sparked it for you?

Derek Sherinian: The creator Alex Semenov approached me in late 2013 to produce and play on a rock instrumental record. Alex decided to have choreographed ballet performing live along with a rock band, he found Stas Tsoy a talented Russian-Korean choreographer and this sounded like an exciting, unique opportunity to me.

Q: What was your vision for this artistically? What message do you guys want to get across? What should people walk away with?

Doug Aldrich: Artistically, I thought this was a cool fusion of arts and I wanted an opportunity to push myself in some new directions after Whitesnake. This was really something interesting and obviously with a great bunch of friends that also happen to be at the top level as musicians. I hope to have people walk away feeling happy to see and hear something fresh that is a new idea.

Derek Sherinian: Heart Of Storm is Alex Semenov’s vision. My job is to help him see his vision through on the musical end.

Tony Franklin: Heart Of Storm is part rock show, part Russian ballet–with a killer band, featuring top name rock musicians–and world class Russian ballet. ‘Storm’ is the main character, and the storyline follows his tumultuous journey of love, anger, jealousy and death. But this is not just a dance show with accompanying rock music. Both the band and ballet are interwoven into a unique, powerful and emotional performance. I’ve never seen anything like it.

Q: How did the idea of fusing the music with ballet come about? How did you create the songs to fit with the ballet choreography?

Derek Sherinian: The music was written first, and then the dancing was choreographed afterwards.

Doug Aldrich: Music has always been in ballet I guess, but this is a fresh approach that the composer felt would be more intense and fit well with the choreography. It could possibly reach a new audience that might otherwise skip ballet. I myself have never been to a ballet, but now I’m interested. The Red Rock Ballet is made up of very talented young dancers from Russia.

Q: Can you elaborate on the band’s chemistry? What’s the dynamic like?

Derek Sherinian: Everyone in this band is not only incredible musicians, but incredible people as well. Tony Franklin and Gregg Bissonette are hands down the nicest rhythm section in rock! I am truly blessed to be working with such a great team of people across the board.

Doug Aldrich: Derek is our fearless leader and has put together a very diverse bunch of people to perform the music. I know Derek had been working on this for some time. Then I happened to be in Moscow for a day and I got a phone call from Brent Woods saying that he and Derek were out at a party in town and asked if I wanted to join. Haha. I was asleep and jetlagged so I didn’t go, but a few months later Derek started to think about this production and called me to play. I have to say, it’s been a huge amount of work for me to get up to speed, but we had so much fun that time has flown by. We are all very different people so it feels unlike any project I’ve been in. Gregg and Brent secretly coordinated wardrobe the entire time showing up with the same shit and shoes or whatever… Tony is truly one of the nicest people you could ever meet. His playing is just astounding… so giant. Like all the guys I reckon. Brandon has just blown me away…with horns and flutes!!! He has been very patient with us as he has not had to deal with a band this loud. But he seriously shreds if that can be deemed a compliment from me. Derek is that bad boy dude with chops that will back it up. Derek and Brent are serious gearheads which of course I can relate to. Derek has more gear than just about anyone I know…. I get it. There is always more room for something new. Brent plays so awesome. I’m really glad to work with him. He is playing solos as well, but also doing acoustic work which is very important with a ballet. Gregg is joking around all the time… always, but he just an insanely talented player. He like all these guys has played with the best of the best cause they are that good.

Gregg Bissonette: The band chemistry is awesome. I’ve been a fan of all of these musicians for many years and have played with everyone before except Brent Woods, but now he’s my new best friend :). The first day I showed up for rehearsal, I was wearing a red Foo Fighters shirt and black jeans and Brent was wearing a red shirt and black jeans. Everyone commented on it, so each morning we decided to mess with the others by calling ahead of time and wearing the same colors. It took them a while to figure it out and they thought we were on the same wave length, but they quickly caught on :).We all really take the music seriously, as a drummer in the band you have two man jobs: the tempo, and controlling the dynamics… bringing it way down and way up when you need to. Brandon is one of the world’s greatest sax players and I’ve played with him at the Baked Potato Jazz club in L.A., on his solo albums, and we were in the house band for the Latin Grammys a few years ago. I was in a band with Derek called Jughead which my brother Matt Bissonette (Elton John’s bassist) and Ty Tabor (Kings X) were also in. Derek and I also played in Italy with Yngwie Malmsteen and Deep Purple, that’s where I played with Doug Aldrich as well. Tony Franklin and I have played a ton together over the years and have been great pals for 20 years. We played years ago on a movie called Endless Summer 2. It was a surf movie. We’ve done a million albums together and toured all over the world. Derek is the glue that brought us all together. He is a great guy, a fantastic musician, and a wonderful producer and band leader. The music we are playing with Heart of Storm is written so well that it lends itself to having a lot of dynamics, (playing at different musical volume levels). It’s very passionate music and when everyone sees the dancers and storyline, they will love it and see that it’s all brilliantly connected.

This hybrid rock concert fused with stunning, young Russian ballet talent–spanning the Bolshoi Theatre, Swan Lake and the Nutcracker–inherits the tradition of classical ballet, while charting new territory into live, emotional theater. Heart Of Storm is an explosive and theatrical rock ballet extravaganza. Watch a clip below.