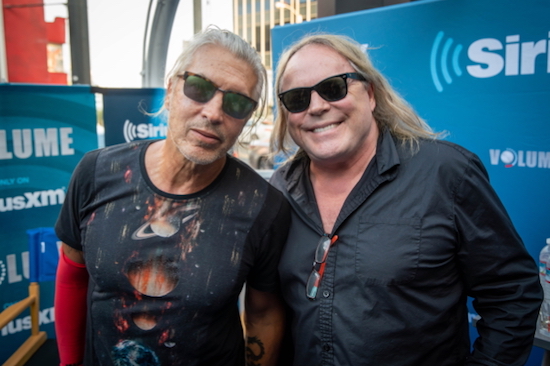 On the possibility of the original Dokken lineup reuniting for other shows:

“It’s based on opportunity that anybody would take, because it’s a good opportunity,” Lynch said . “If somebody comes to us and says, ‘We’ll throw X amount of money at you…'”

Added Dokken, “Jeff [Pilson, bass] is the biggest stick right now, because Jeff has been in Foreigner 20 years and that crazy guy does, like, 200 shows a year. So, it was only an act of God that he said, ‘Oh, I’ve got this one month off with Foreigner, and we can go to Japan.’ But I could do a Dokken reunion. There’s gonna come a time soon I can’t even play guitar anymore. I’ve got some physical s–t going on. I can’t even play guitar hardly anymore, ’cause I’ve got atrophy in my hands.”

Continued George, “You know what, right now? The four of us are alive. Despite atrophy and despite whatever problems we all individually [have].”

Dokken’s classic lineup — Dokken, Lynch, Pilson and drummer “Wild” Mick Brown — reunited for a short Japanese tour in the fall of 2016. The trek marked the first time in 21 years the four musicians had hit the road together.

A  concert DVD focusing on the band’s reunion tour, Return To The East Live (2016), was made available last year.