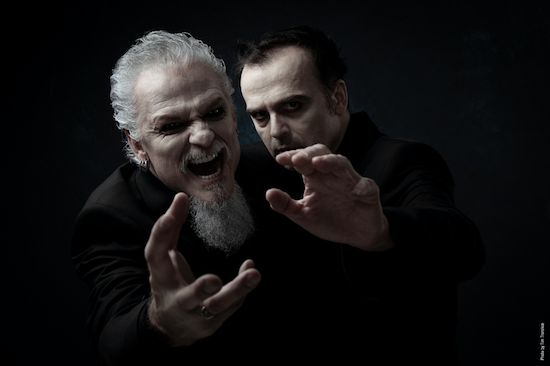 [Dana’s note: I apologize for this news being posted almost a month late. It got lost in my mail, but better late than never].

As the world awaits the release of Demons & Wizards III on February 21st via Century Media Records, the band has released another video for their latest single, Wolves In Winter. The epic visual was directed by Ivan Čolić and produced by the iCODE Team. The video can be watched here: https://youtu.be/TM5hreyVfIc.

Jon Schaffer explains, “I’m not sure why the title of this song came to me so strongly when I wrote and arranged the music. But it certainly did. I even put the wolves howling part on the pre-production demo before I had written any lyrics or heard any vocal melodies from Hansi. It is about embracing the beast that lies within us all. At any rate, it’s a cool song with a big hooky chorus. My favorite part is the verse riff though. It just sounds heavy and intense, and you can’t go wrong with that combination.”

Hansi Kürsch adds, “Wolves in Winter is definitely a tune, you want to hear live and even more than hearing it, you want to sing along with it immediately. Feel free to rehearse in front of your speakers.”

The new song comes from band’s upcoming release, an album that was fifteen years in the making. The album opener “Diabolic” and the AC/DC inspired “Midas Disease” were previously released to fan and critical acclaim. III is available as strictly limited deluxe vinyl artbook, 2CD artbook, gatefold LP, CD digipak and as digital standard/deluxe edition. Fans can go to https://demonswizards.lnk.to/III for more information on all configurations.

Demons & Wizards is one of the most legendary collaborations in the history of heavy metal, uniting the talents of Jon Schaffer (Iced Earth) and Hansi Kürsch (Blind Guardian). In 2019, the duo returned to the world’s stages and reissued its previous studio albums, but now the time is nigh to offer a new, monumental and highly diverse record.

Demons & Wizards musically embodies both musician’s stylistic trademarks and has resulted so far in two hugely celebrated studio albums, Demons & Wizards and Touched by the Crimson King. Both records have been reissued in 2019 on time with the group’s extremely successful return to the world’s stages. Now, the band presents III, a stunning monument of dynamic and powerful heavy metal that simply has all you would expect from these iconic musicians! III is epic, melodic, crushingly heavy, atmospheric, and all in between. 65 minutes of heavy metal mastery! III can now be pre-ordered in a variety of luxurious and limited formats: https://demonswizards.lnk.to/III.

The III recording line-up consists of:

IN LIGHT OF THE CORONA VIRUS, LIVE NATION AND AEG, ARE SUSPENDING TOURS ›