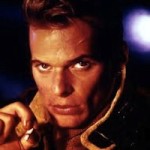 David Lee Roth was a guest on today’s (March 11th) Sirius/XM’s The Opie And Anthony Show.

Highlights from the two hour conversation appear below as transcribed and edited by myself for the site. I apologize in advance for any errors on my part, I tried to do my best.

Roth discussing how the members of Van Halen are getting along and is there any conflict?:

“There is always conflict, I am not going to sugar coat it. In our band there is a constant back and forth, and at the same time, I think everybody’s more than old enough to really respect what we have been allowed to do…We just [keep] coming back.

..For Edward and I, there’s a lot of whatever that chemical that is in guys, we’ve never lost it. We are both competitive with ourselves personally to an [almost] obsessive compulsive [degree]. With or without Eddie Van Halen in my life, a lot of time is spent with my head in my hands going, ‘Come on Dave, come on,’ and [Eddie does] just as much, if not more so. But, when we come together there is that mutual support of ‘Wow, boy am I glad I met you. Wow!’ We’ve done some great stuff together and that also combines with ‘I think you’re in my space.’… The conflict was there from day one. It sustained from day one and has lasted for 35 years. Not a note from the symphony has changed. [But], it is that conflict [and] collision, that is the sound of Van Halen. It’s a mutual push/pull that can be found on the most colorful football [and] baseball teams.”

Speaking about how Wolfgang [Van Halen] is working out:

“He’s doing great. We had a great year of touring on the road.”

Does Wolfgang ever side with his father in times of conflict?:

“No, there is no side any more. In terms of picking the songs, it’s like a great pizza place, whatever’s on top, it’s all good.”

On his relationship with former Van Halen bassist Michael Anthony:

“We have no problems. I am proud of the stuff we did in the past. The vocals in Van Halen are as easily important as the rhythm section, production, what have you.”

Discussing why Roth opted for a solo career after the band’s 1984 album:

“The band was in disarray and we were all guilty and all the usual reasons why bands break up. It had a great effect on me..At this point in time, I have come full circle and I got a lot of those wild oats and crazy ideas out. I have gone out into the territory and came back. Now, I like things a little more predictable, and with Van Halen, I have that.”

On guitarist Steve Vai, who was in Roth’s solo band:

“Steve came out of nowhere. He had been working in the shadows for a little bit with Frank Zappa, of all people. But, since then, he has really built a career.”

Speaking about whether there was competition between Van Halen featuring Sammy Hagar and Dave’s solo band:

“The one thing I learned from Richard Nixon was,’Never pay attention to the press. Never pay attention to reviews. Never look at pictures of yourself and try not to look at the competition much,’ and I have been pretty successful with that….In Rock N’ Roll we never really competed with other bands. We want to be the one you remember at the end of the night, but, you know, it wasn’t like sports. I was surprised when the competition between Van Halen and my solo band sprang up. I think that was a lot of our market friends getting involved. But, the band and I knew, that somewhere, ultimately, we were going to be back together at some point. They have to give us a star in some cement in front of some Vegas hotel someday. But, other bandmembers and other agents get involved and then it becomes a sling fest.”

“That will make you look in a mirror and confront exactly everything you don’t want to confront. ‘Mirror, mirror on the bathroom sink, you used to say my shit didn’t stink, you bitch.'”

Speaking about whether he ever ran out of money:

“No, but I did have to stay working. Playing state fairs, casinos, clubs, theaters, etc.. You what though? I do miss those state fairs, they’re a hoot.”

Did he ever get along with Sammy Hagar?:

What about the Sam and Dave tour?:

“[That] was a collision course as well. We had our antagonisms, but…I think it was his people…I think our change up was dignified until agents, managers and other people got involved.”