BY OVERWHELMING DEMAND, NEW SHOWS ADDED TO THE #1 SELLING GUNS N’ ROSES “NOT IN THIS LIFETIME” TOUR 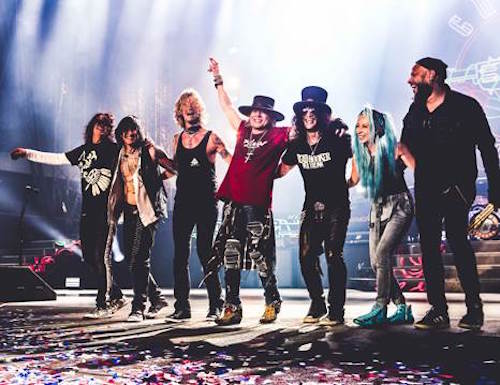 Three decades ago today, Guns N’ Roses transformed and transfixed the world of rock and roll forever with their seminal debut album Appetite for Destruction. To celebrate the multi-platinum record that welcomed fans to the jungle and topped the Billboard 200, the unprecedented legends of rock are announcing a selection of new stops on their momentous Not In This Lifetime Tour produced by Live Nation.

The highly anticipated North American run of the tour begins July 27th in St. Louis, MO and the music icons are revealing eleven more coveted dates in cities across the U.S. including Newark, DC, Hartford, Louisville, Milwaukee, Nashville, Sacramento, and San Diego. They will also be adding a second stop in Toronto, and third dates in both New York and Los Angeles.

Citi® is the official presale credit card for the Guns N’ Roses Not In This Lifetime tour. As such, Citi® cardmembers will have access to purchase U.S. presale tickets beginning Monday, July 24th at 10:00am local time until Thursday, July 27th at 10:00pm local time through Citi’s Private Pass® program. Tickets for the Los Angeles date November 29th at The Forum will be available beginning Monday, July 31st at 10:00am local time through Thursday, August 3 at 10:00pm local time. For complete presale details visit citiprivatepass.com.

AT&T is sending customers to the front of the line with AT&T priority presale ticket access beginning on Wednesday, July 26th at 10:00am local time through Thursday, July 27th at 10:00pm local time via the AT&T “Thanks” program. Tickets for the Los Angeles show November 29th at The Forum will be available beginning on Wednesday, August 2nd at 10:00am local time through Thursday, August 3rd at 10:00pm local time. For complete presale details visit att.com/frontoftheline.com.

Tickets for new dates of the Not In This Lifetime tour go on sale to the general public starting Friday, July 28th at 10:00am local time at livenation.com. Tickets for the Los Angeles show November 29th at The Forum will be available to the general public beginning on Friday, August 4th. Exclusive Guns N’ Roses VIP packages are available for North American dates at vipnation.com.

Last night the band continued their celebration of the 30th anniversary of Appetite for Destruction and the upcoming start of their North American outing with an exclusive show at Harlem’s world famous Apollo Theater. The intimate evening for fans was the first time Guns N’ Roses performed at the iconic venue. Appetite for Destruction sold 30 million copies globally when it leapt onto the scene in 1987 and became the bestselling U.S. debut in music history.

The full list of routing can be found below, with new dates bolded.

Not In This Lifetime Tour North America:

‹ REVOLUTION SAINTS TO RELEASE NEW ALBUM, “LIGHT IN THE DARK,” ON OCTOBER 13TH