While the current sold-out Black Mass tour rolls on, Black Veil Brides have announced another string of dates scheduled for next February 2015. The 18-city Black Mass 2015 tour begins on February 5th in Richmond, VA and wraps up on March 1st in San Diego, CA. The tour will make select stops in the United States before crossing over the border in to Canada for the bands long-awaited return north. The band will be playing 9 shows in Canada making stops Montreal, Toronto, Edmonton and Vancouver to name a few before returning to the United States for the final 4 shows. Opening the Black Mass 2015 shows will be special guests Memphis May Fire and Ghost Town. Tickets for the Black Mass 2015 will be on-sale on Friday November 14th via ticketmaster.com.

Black Veil Brides are currently on The Black Mass 2014 headline tour that runs through mid-December. The 37-date trek is making stops in Kansas City, New York and Orlando and will wrap up on December 15th in Albuquerque, NM. Falling In Reverse, Set It Off and Drama Club have been tapped as the support bands for The Black Mass 2014. Tickets and VIP packages for the tour are currently on sale and links can be found at BlackVeilBrides.net.

Black Veil Brides have announced the release of the first live DVD of their career. The DVD is slated for release in June 2015 and is taken from the band’s sold-out hometown show in Los Angeles at the Wiltern Theater on November 1st. The show was part of the band’s inaugural Halloweekend event as part of The Black Mass Tour. The DVD was directed by Casey Tebo, known for his work on the acclaimed Aerosmith documentary, Rock For The Rising Sun. Pre-order packages for the live DVD will be announced soon. 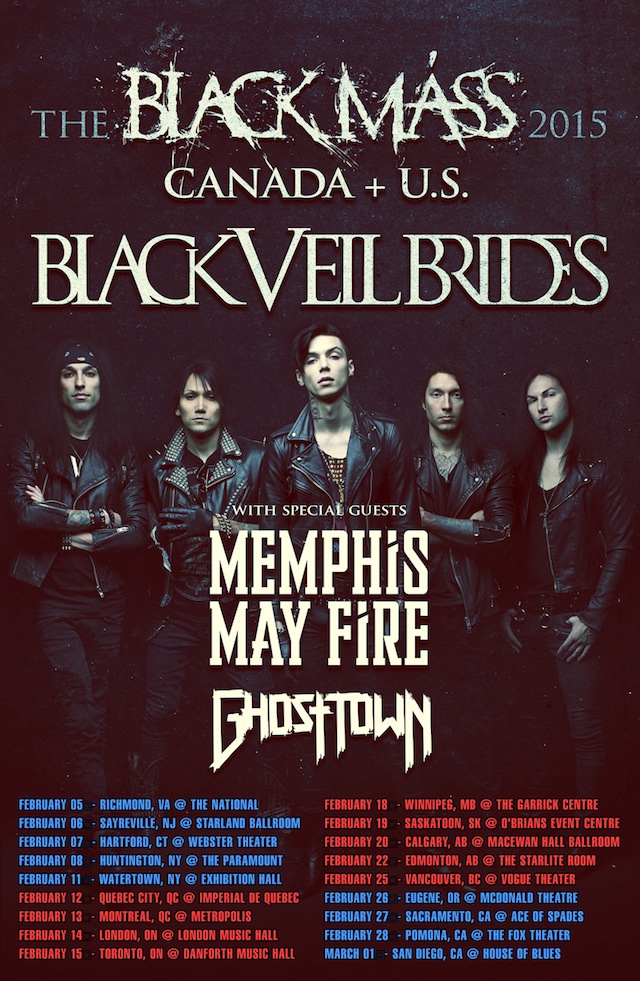