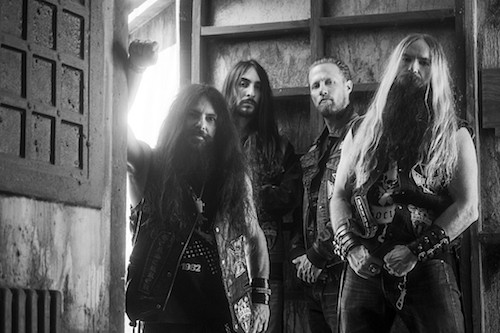 Black Label Society, led by American guitar icon Zakk Wylde, has released another brand new music video for the single A Love Unreal from their latest LP, Grimmest Hits. The video was directed by long-time collaborating director Justin Reich, watch it below.

Black Label Society recently soared into the charts with their new LP via Entertainment One, Grimmest Hits. The LP landed at #4 on the Billboard Current Charts, the highest charting LP since Order Of The Back released back in 2009. Grimmest Hits reached #1 on the Billboard Hard Music, number one Independent, and number two Rock Charts.

Black Label Society is in the middle of a hefty batch of North American tour dates spanning coast to coast in support of the all-new LP. Support is supplied by legends Corrosion Of ConformityY on all dates. Select tour dates are seeing support from EYEHATEGOD and Red Fang. View the band’s tour itinerary, here.

Black Label Society released their tenth full length titled Grimmest Hits, on January 19th. The new effort is the highly anticipated follow up to Billboard Top five charting titles Catacombs of the Black Vatican (2014) and Order of the Black (2010). In-between then and now, Zakk Wylde released Book of Shadows II, the long awaited follow up from his 1996 solo debut of the same name, which debuted at #18 on the Billboard Top 200 Chart.

Wylde, now reunited with Ozzy Osbourne after an eight-year break, has played a handful of dates with whom he refers to as “the boss,” with no signs of slowing down. The reunion kicked off over the summer with a highlighted performance at CHICAGO OPEN AIR with high profile festivals like LOUDER THAN LIFE and OZZFEST MEETS KNOTFEST on deck to close out the year.

Wylde will stay on the road beyond the Black Label Society dates in 2018 reunited with “the boss” on the No More Tours 2. The two-year stretch will take place this spring with dates in Mexico, South America and Europe. The tour’s first U.S. leg, which will feature Stone Sour as the opening group, starts in Allentown, Pennsylvania in August and wraps in Las Vegas in October. Tickets for the North American dates are on sale now.