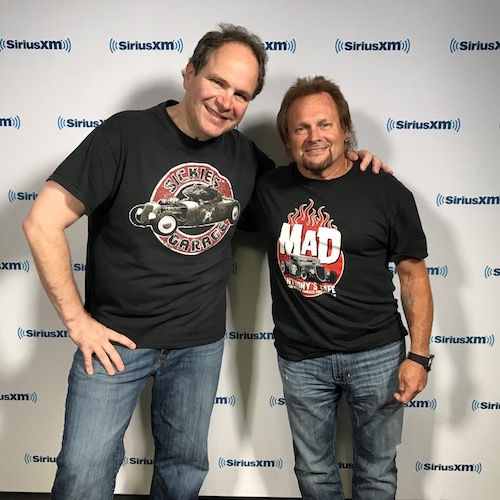 Former Van Halen bassist Michael Anthony says that he “can pretty much confirm” that the band’s singer David Lee Roth personally donated thousands of dollars to a fundraising campaign launched by Anthony’s family after the bassist’s two-week-old grandson died of heart disease.

In a Facebook post announcing his loss, Anthony revealed that he would participate in the hospital’s Walk L.A. in June to support the facility. He invited the public to donate to his family’s team, “Rex And The Heart Beaters.” Anthony was hoping to raise $3,450 for his team, and that goal was easily eclipsed — in large part due to the generosity of the campaign’s top donor, a “Dave Roth,” who chipped in $10,000 for the cause.

During an appearance earlier this week on Eddie’s Trunk Nation show on SiriusXM channel Volume (106), Anthony told Eddie, “I check the donation page every single morning when I wake up, just to see how the team’s doing and raising money and people that are donating. And I saw this one morning, ‘David Roth,’ and I’m, like, ‘Oh my God! I can’t… What? No, this can’t be right.’ And then what happens is an e-mail gets sent to me personally saying, ‘A donation has been made on your behalf by David Roth. Ten thousand dollars.’ And so I can e-mail back to thank the donors. This e-mail went to a business management agency — that’s what the donation came through. And I actually e-mailed back and said, ‘Dave, is this you? I hope it is.’ And I thanked him for the generous donation from the bottom of my heart. I sent the e-mail and I said, ‘Here’s my e-mail address. E-mail me back, let me know it’s you, ’cause I would really like to talk to you. Anyway, just thank you.’ And I got an e-mail back a couple of days later — from the same business management agency. It just said, ‘Hi, Michael. It’s David. Sorry about your loss. I’ll be in touch.’ [So] I can pretty much confirm that it was him.”

Michael was also asked about former VH singer Sammy Hagar’s recent comment that he would be open to a Van Halen reunion tour, including Roth, with the two frontmen taking turns performing their classic numbers.

“I think now’s the time, especially if you listen to some of the interviews [Sammy has been] doing or whatever now,” Anthony said. “Right now he’s saying the proper way to do a Van Halen tour, he’s saying, ‘Let’s do it with Dave and myself.'”

The bassist continued, “If we did, like, an hour with one singer and then an hour with another singer, you never know — there might be a lot of people that don’t wanna come for the first hour, or don’t wanna come for the second singer, or whatever. This way you mix it up and everybody’s gotta stay for everything. And believe me, if something like that came to fruition, I guarantee there wouldn’t be one person who would leave that show disappointed with anything — with either singer, probably.”

Anthony went on to say that a reunion involving all the original members plus Hagar would only happen if “everybody was equally excited to do it. Because you don’t wanna go out and have it be work, you don’t wanna do it and have people say, ‘Well, they’re doing it just for the money,'” he explained. “I wanna truly go out there and just kick ass and give the people everything, and that’s what it would have to be.”

Asked by “Trunk Nation” if he has had any further contact with Alex, Michael said: “No. With Alex, no, actually, I have not. And then people were going, ‘Why don’t you call him back? Call him back and tell him it was great talking with him or whatever.’ And I said, ‘You know what? No.’ We had a great conversation and I’ll just let it lie and see what happens. ‘Cause I don’t know what his situation is or whatever — I don’t know if there is something keeping him from calling me back or whatever. But I’m not gonna speculate.”

To make a donation to Michael Anthony’s fundraising page, Rex and the Heart Beaters, click here.

‹ KISS’ GENE SIMMONS SAYS “THERE IS SOME WRITING GOING ON”