BASSIST DAVE ELLEFSON SAYS THAT THE CRIMINAL PROCEEDINGS AGAINST THOSE WHO POSTED SEXUALLY EXPLICIT VIDEOS OF HIM WITHOUT CONSENT, HAS BEEN “RESOLVED” 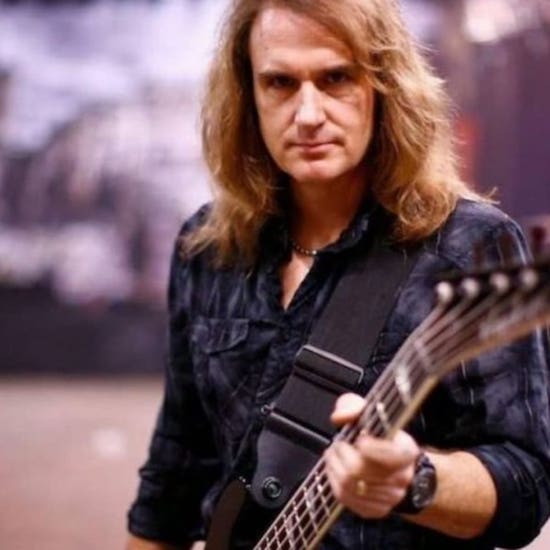 As previously reported, former Megadeth bassist Dave Ellefson was guest on Eddie’s Sirius/XM show, Trunk Nation With Eddie Trunk, on October 19th, where he discussed his recent sex scandal that resulted in his firing from the band.

Blabbermouth.net has posted further highlights from that discussion which can be read below.

Just days after sexually tinged messages and explicit video footage involving the bassist and a woman that is not his wife were posted on Twitter. Shortly after explicit video of him emerged online, Ellefson released a statement on Instagram denying all social media chatter that he “groomed” an underage fan. He also filed a report with the police department in Scottsdale, Arizona alleging unlawful distribution of sexually explicit images of him by unknown offenders. In the report, Ellefson admitted that he had been exchanging sexual text messages with a Dutch teenager, who captured a video of several of their virtual “masturbating encounters” without his consent and shared them with friends. (According to bassist, the woman was 19 at the time of their first virtual sexual encounter.) Ellefson, who lives in Scottsdale, first became aware of the video on May 9th, when the claim David Ellefson of Megadeth is a pedophile appeared on Instagram.

“I think there was a big fear of — there’s always this talk of cancel culture and all this stuff,” he continued. “And I was, like, ‘Listen, that was not me.’ And I had every right to stand up against that and defend myself against it. And I just turned that over to the lawyers and police department and let them deal with it, and they did.”

When Eddie brought up the point that the only apparent “illegality” in this case lied with the person who actually leaked the above-mentioned video, Ellefson said: “A hundred percent. That’s why I didn’t hire a civil lawyer to sue people for a million bucks. I hired a criminal lawyer, and what they do is prosecute to put people in jail. ‘Cause those were the crimes. You can’t just go do s–t like that — put stuff out there, content — and not have a penalty. That is the crime. And I think people just think they can — and not everybody; I’m not saying all people — but there is a faction that they just think that that could be just done as a joke and for fun, and it can’t. Of course, it’s the Internet, so people live in foreign countries; there’s all this stuff. That’s why the best thing, I think, is to, first of all, just get away from those platforms because that is a breeding ground for that society to do that.”

When asked if there are still ongoing legal proceedings in the case, Ellefson said, “It’s been resolved. We took the steps necessary, walked through that process, which was necessary to do, and that’s all landed and, as of now, that’s fine.”

David, who studied for a year at Concordia Lutheran Seminary in St. Louis nearly a decade ago, also wanted to address one specific “misconception” about him that has been repeatedly raised in the months since his masturbation videos were posted online. He said, “There’s a misconception that I’m a pastor. I am not a pastor. I did a year of seminary, and they made it real clear, ‘If you are gonna continue at seminary, you need to quit Megadeth,’ so I quit seminary to be in Megadeth. And I remember telling my mom that, when she was still alive — God rest her soul. I said, ‘Hey, I withdrew out of seminary,’ in good standing, to continue being in Megadeth. And she was actually very disappointed. She was, like, ‘You know what? Megadeth is holding you back. That’s too bad. You should have stayed in seminary.’ Turns out maybe I should have listened to my mom; I don’t know. [Laughs] Of course, mom wants the best for you.”

“Who knows? Whatever,” he continued. “I’m a rock and roller, man. I’m a founding member of Megadeth. It’s who I am. It’s what I do. It’s part of my life. It’s part of my existence. So I have no regrets about any of that. But, I think that was a misconception. People started throwing that around. And so I’ve never been an ordained pastor. Yes. I did explore that world for a time.”

He went on to say that there is a perception that people of faith must set a higher standard of how they live and how they treat others. “It’s almost like you’re this entity that’s floating up toward the heavens: ‘Oh, he’s such a wonderful man. He’s a man of faith. He’s got his family. And then this happens.’ It’s, like, ‘What the hell is this?’

“I mean, look, admittedly I’ve sort of trained the public to think that I’m one of the more well-behaved rock stars out there, and for the most part I have been,” he continued. “But at the same time, and this isn’t to claim anything other than just, oops, s00t happens. That is what it is.”

“In the season that I was away from Megadeth, in the 2000s, I got involved in other things in church, and raising my family, and blah blah blah, these things, and so by nature, I kind of became more of a suburban homebody — the dad guy,” he added. “And then I went back to Megadeth in 2010. And the thing is to try to reconcile that you’re not one guy at home and another guy on the road, that you’re the same guy. And I think for anybody who spent any time on the road — whether you’re a rock star, a traveling salesman or whoever you may be — that is the challenge, and it’s a real challenge, to keep your life in order when every day your toothbrush is in a new zip code.”

In related news, Ellefson’s new band, The Lucid, just released their self titled, debut album on October 15th. To read more details about this release, and to stream their songs, Damned and Maggot Winds, please click here.

L.A. GUNS PREMIERE NEW SINGLE AND VIDEO “GET ALONG,” NEW ALBUM “CHECKERED PAST,” OUT NOVEMBER 12TH ›