The grand prize winner will open the main stage and the runner up will open the second stage. Judges for the event include Eddie Trunk, Lita Ford, Tracii Guns (LA Guns), Brent Woods (guitarist for Sebastian Bach), and Jay Ruston (producer/engineer for artists such as Anthrax, Steel Panther, Stone Sour, The Winery Dogs, and more). Doors are at 7:00 pm, with the event wrapping up at 11:30 pm. The lineup is as follows:

VIP packages for SiriusXM’s Hair Nation Festival have already sold out, but there are still General Admission tickets available at www.HairNationFest.com starting at just $15 (plus fees).

SiriusXM’s Hair Nation Festival is produced by Live Nation and Synergy Global Entertainment (SGE) and will feature nonstop music on two stages, including a rotating main stage with back-to-back performances, VIP Meet and Greets, a vendor village, and more.

Irvine Meadows Amphitheatre is located 8808 Irvine Center Drive in Irvine, CA and is less than two hours from Los Angeles, San Diego, Riverside and San Bernardino Counties. It’s also conveniently located a short drive from John Wayne Airport in Orange County, CA. For those traveling to the Southern California area to attend SiriusXM’s Hair Nation, there are a wide variety of lodging options in the Irvine area.

For the most up-to-date information, please visit: 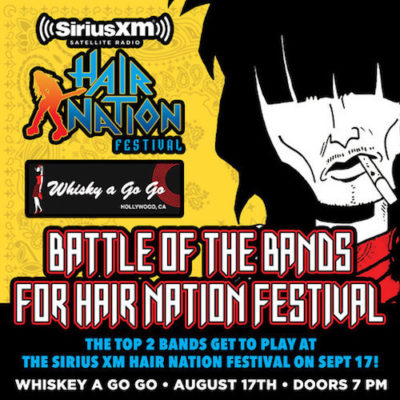 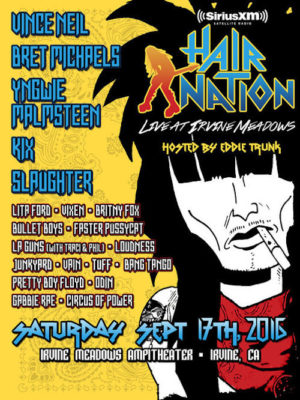