Def Leppard have confirmed that they will release an extended version of their groundbreaking 1996 album Slang next month.

The deluxe edition, released via their own Bludgeon Riffola label, includes a second disc of previously unreleased tracks, demos and alternative versions.

Slang was their first record with guitarist Vivian Campbell following the death of Steve Clark in 1991. The album saw Def Leppard reacting to the grunge era by moving away from the ultra-polished sound masterminded by Mutt Lange – and although it didn’t sell as well as had their previous records it has come to be regarded as their most underrated work.

The new version comes in CD and digital formats, both including the album’s 11 original tracks plus the additional material. An iTunes edition contains more bonus tracks, while a double-vinyl version also contains exclusive songs.

The Slang Deluxe Edition goes on sale on February 10th. 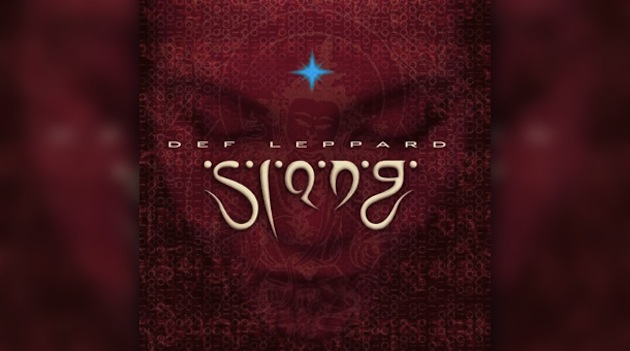 Pantera reached a major milestone in 1994 when the legendary metal band’s seventh studio album, Far Beyond Driven, debuted at #1 on the Billboard Top 200, becoming the fastest-selling album of the group’s career and its second consecutive platinum release. Not only a commercial success, the album also earned positive reviews around the world for the beautiful brutality of its all-out sonic assault.

This year marks the 20th anniversary of that landmark album and Rhino is celebrating with a special two-disc version that includes a newly remastered version of the album, along with a live performance from the 1994 Monsters of Rock Festival. Far Beyond Driven: 20th Anniversary Edition will be available on March 25th for a suggested list price of $19.98. A digital version will also be available.

Following the breakthrough success of 1992’s Vulgar Display of Power – which has since been certified double platinum – singer Philip Anselmo, guitarist Dimebag Darrell, bassist Rex Brown and drummer Vinnie Paul returned in March 1994 with Far Beyond Driven. Following its #1 debut, Far Beyond Driven remained on the Billboard album chart for seven more months and many still regard it as the heaviest album to ever top the chart.

Its 12 songs represented a continuation of the previous album’s relentless musical onslaught with hard-hitting tracks like the first single I’m Broken as well as the mosh-pit classics 5 Minutes Alone and Slaughtered. Another standout track was the group’s swirling acoustic cover of Black Sabbath’s Planet Caravan, which became a live favorite when Pantera hit the road to support the album later that year.

Fans already familiar with Far Beyond Driven are in for a treat with the second disc of the 20th Anniversary Edition. Dubbed Far Beyond Bootleg-Live From Donington ’94, the disc contains Pantera full live set recorded at the Monsters of Rock Festival in Donington, England on June 4th, 1994. The 40-minute show comprises nine tracks taken from the band’s three most recent albums including: Use My Third Arm and Strength Beyond Strength from Far Beyond Driven, Walk, Mouth For War, and This Love off of Vulgar Display of Power, plus the title track from Cowboys from Hell as well as the live staple melding Domination and Hollow.
Far Beyond Driven: 20th Anniversary Edition Track Listing:

1. Use My Third Arm
2. Walk
3. Strength Beyond Strength
4. Domination/Hollow
5. Slaughtered
6. Fucking Hostile
7. This Love
8. Mouth For War
9. Cowboys From Hell 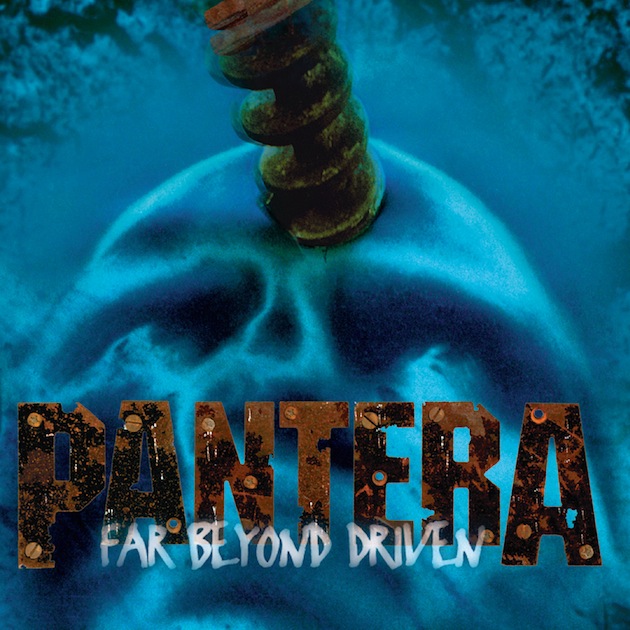 The Winery Dogs–Mike Portnoy (drums), Billy Sheehan (bass) and Richie Kotzen (lead vocals, guitars)— is getting 2014 started with a new round of tour dates and the release of two new special versions of their self-titled and self-produced debut album that debuted in the Top 10 on various Billboard charts.

Set for release in April, The Winery Dogs Special Edition will be comprised of two-CDs. Disc 1 is the standard album and Disc 2 is entitled Unleashed In Japan 2013, comprised of 10 songs recorded live in Japan during their July ’13 tour including Criminal, a track previously unavailable in the U.S., along with a 16-page booklet of live photos and lyrics. A deluxe package for die-hard fans will be released simultaneously. Dog Treats: The Winery Dogs Deluxe Special Edition will be sold in a box resembling a box of dog treats, and will include the special edition collection of music, a DVD featuring four music videos and interview footage, demos from the original recording sessions, a “studio diary” written by Mike Portnoy, as well as some unique merchandise unavailable elsewhere.

The four videos that have been released (Time Machine, the latest single currently being serviced to radio, Elevate, I’m No Angel and Desire) have garnered over 1.5 million views on their official YouTube page.

Check out The Winery Dogs at any of the following U.S. tour stops (with more dates to be added in the coming weeks):

Black Lable Society have released the album art, track listing and first single from their forthcoming LP due later this year.

Zakk Wylde recently appeared on VH1 Classic’s That Metal show. Wylde also stopped by the Artie Lange show while in NYC to talk all things Catacombs of the Black Vatican.

Catacombs of the Black Vatican, will be released Tuesday, April 8th, 2014. 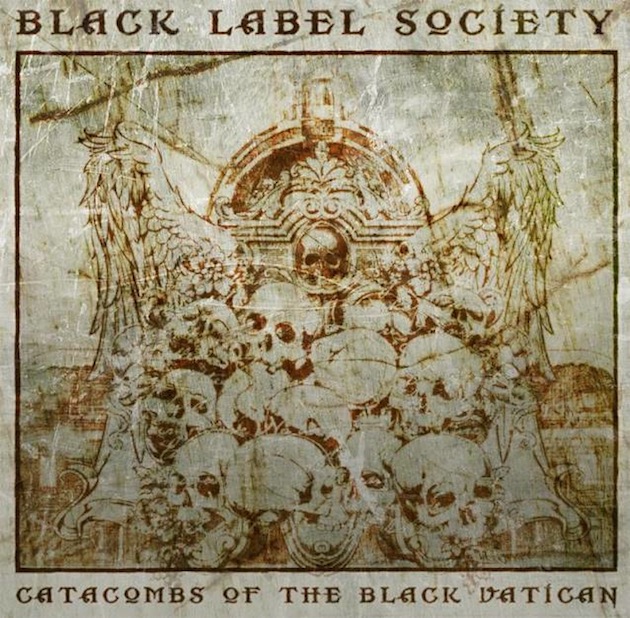 Red Dragon Cartel have been making waves since the band announced the release of their upcoming debut last year. Now, the band made up of guitar legend Jake E. Lee, bassist Ronnie Mancuso, singer D.J. Smith and drummer Jonas Fairley are unveiling their debut video for the song Deceived. The song comes from their soon-to-be-released Frontiers Records album Red Dragon Cartel out on January 24th in Europe and January 28th in North America.

The video for the song can be seen below.

Fans that pre-order the album digitally on iTunes receive the song as an instant download. The album is also available for pre-order on Amazon.

Red Dragon Cartel will be hitting the road in the road in March to showcase Jake E Lee’s return to the world. The begins on March 5th in Tempe, AZ and runs all the way through April 6th, where it wraps up in Seneca, NY. The tour will make stops in Oklahoma City, Houston, Raleigh and Philadelphia to name a few. The band will also be heading over to Europe where they are confirmed to perform at this year’s Download Festival in Donnington, England and the famed Sweden Rock Festival. More dates are being added around the world as the band looks to bring the music of Red Dragon Cartel to every corner of the globe.

From the opening riff of “Deceived” to final sustained piano chord of “Exquisite Tenderness,” it is clear Red Dragon Cartel has created an album that stands amongst some of the greatest hard rock albums of all time. Infectious songs such as “Shout It Out,” “Wasted” and “Slave” showcase the band’s ability to write memorable hooks and vocal melodies. Robin Zander of Cheap Trick lends his voice to the track “Feeder” and a lyric video for the song can be seen at http://tinyurl.com/FeederLyricVideo. Maria Brink of In This Moment lends her unique vocals to the track “Big Mouth.” Paul Di’Anno and Sass Jordan also lend their talents to the band’s debut. Jake E. Lee’s trademark playing style instantly shines through and picks up right where he left off.

SLAYER, WITH SPECIAL GUESTS SUICIDAL TENDENCIES AND EXODUS TO HIT THE ROAD WITH SELECT TOUR DATES IN MAY

Slayer will take a break from writing and recording their next album to hit the road on May 9th for a handful of dates. Joining Slayer as special guests for these shows are Suicidal Tendencies and Exodus, marking the first time Slayer and Suicidal have toured together since the 1990 European Clash of the Titans tour. Gary Holt, who continues to fill in for Slayer’s fallen guitarist Jeff Hanneman, will do double-duty as guitarist in his primary band, Exodus.

Tickets for Slayer/Suicidal/Exodus go on sale this Friday, January 24th. Log onto www.slayer.net for ticketing information.

“Can’t wait for this week of shows to happen,” said Slayer’s Kerry King. “LOVE Suicidal, and havent played with them in over 20 years! Everyone knows I’m a huge Exodus fan also. I guarantee you I will be watching every show from the stage! Going to be awesome!!!”

“It’s been 24 years since Suicidal Tendencies played with Slayer,” added Suicidal Tendencies’ Mike Muir, “so it’s long overdue that we finally play some shows in the States together. I have lots of great memories from that tour, and know that there will be a lot more after these shows, for the band and the people. Can’t wait!”

Gary Holt states, “I am very excited to announce Exodus will be joining Suicidal Tendencies and the mighty Slayer in May for a short trip ending at the Rock on the Range! Double duty will have never been so much fun! Looking forward to this one in a big way! Let the mayhem begin!”

The dates will culminate for all three bands at the May 17th Rock on The Range rock festival in Columbus, OH, where they will share the stage with artists including Guns N’ Roses, Avenged Sevenfold, and Kid Rock. 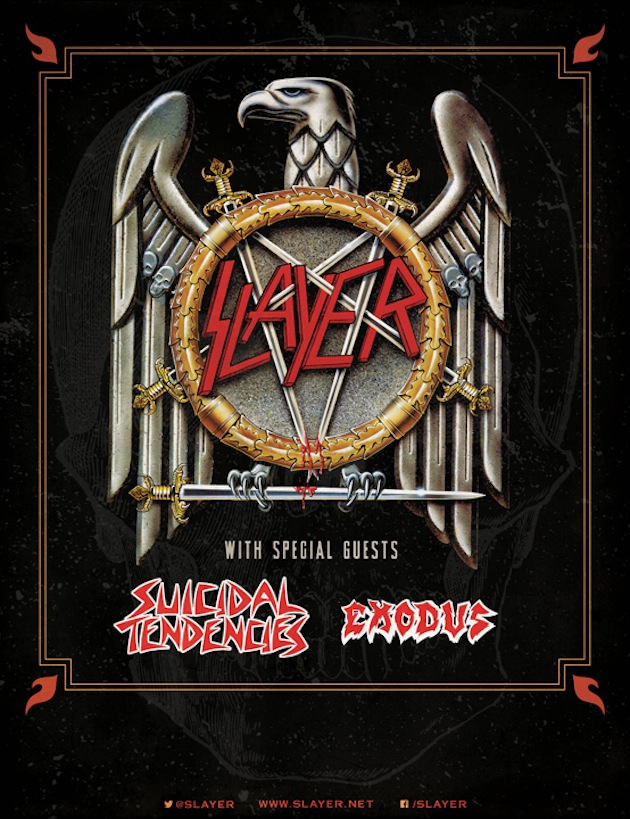