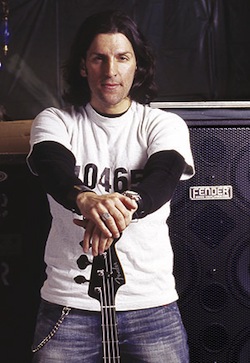 Ruben: You guys have been on the road for a longtime. If I recall correctly you’ve been playing live shows prior to the release of Worship Music which was released in September of 2011.

Frank: It’s been a crazy run—you’re right it’s been over two years now. We played our first show the day before the album’s release September 13th of 2011 or something like that. We played the ‘Big 4’ show at Yankee Stadium—so it’s been quite a run for sure. We weren’t going to do another run but ‘Metal Alliance’ came up with this killer package and here we are. We’re having a blast. We’re doing the entire ‘Among the Living’ record and the shows are either selling-out or close to it. It’s a really nice thing.

Ruben: When will we be hearing some new original music from Anthrax? I know the fans are chomping at the bit. You’re locked into this Metal Alliance tour then I’m sure you’ve got some festival stuff in Europe. What’s the tentative play for writing sessions?

Frank: (laughs) You sound like my manager you know that?! (laughs) We have a South American tour after Metal Alliance and the offers just keep coming in. Like you mentioned we have a European festival run this summer then we’ll get deep into full Anthrax writing mode in September. You can see that we’re getting the itch to write new music. Guys are starting get ideas recorded which is how it all starts.

Ruben: In this cycle of interviews for the promotion of Worship Music I’ve been fortunate enough to speak to everyone in the band some twice that is with the exception of Scott (Ian). The guy has been illusive but when I catch up with him it’ll be killer. I spoke with Rob (Caggiano) on a couple of occasions and the two times I spoke to the guy he seemed genuinely stoked about being in Anthrax, the ‘Worship Music’ album and touring. Then a few months ago he up and quit the band. There was a recent quote from Rob where he said something to the affect that he wasn’t all that into the music? He certainly fooled me. I saw a couple Anthrax shows on this tour and he looked ‘into’ it.

Ruben: From an outsider’s perspective it didn’t appear like you guys hit the panic button when Rob decided to leave the band. If I recall the dates were announced and the tour was booked. Did you guys freak?

Frank: Not at all. We had Jon available and we know him well—it was a no brainer. At this point in our career we don’t panic because we’ve been around the block a few times. We know things will be fine because we’ve been there before. I guess it’s our New York mentality. Panic? It’s not even in our vocabulary.

Ruben: Rob was with you guys for over a decade. Have you thought at all about a replacement at this point?

Frank: Yeah he was in the band for 11-12 years. No, not at this point. Jon’s playing with us and we’ll see how this goes. I don’t think anyone’s even thinking about that right now. We’re having a great fucking time man. We’re getting well with Jon he’s a fantastic guitar player and we’ll just see how it goes when it comes to writing for the next record. We’ll approach the next record who we’ve done records in the past. Charlie, Scott and I will head into our rehearsal space and bang out some song ideas—that’s how it starts.

Ruben: You stepped aside from Anthrax for a little bit and watched someone take over your role in the band. How weird was that for you?

Frank: Well as you know I went on and played with Helmet for a couple of years. We needed a break from each other. I think that made us stronger as a band. That was a great time for me in Helmet—I had a blast and I just love those guys. Page (Hamilton) is a great guy and Johnny Tempesta played drums. I think that experience made me a better person and a better bass player and all of the above. It made me realize that I’m a lucky guy and that I love playing bass. Then the reunion with Anthrax happened and that was great. Here we are now, it’s been non-stop fun since. It was a fun time man, it was all positive. Joey Vera one of my best friends was playing bass in Anthrax. When I was on tour with Helmet I actually went to see Anthrax with Joey playing bass in the band. I had a day off and I took in the show, it was a blast. It was absolutely amazing to see them. It was just needed thing—that’s all.

‹ CHEAP TRICK TO CELEBRATE 35TH ANNIVERSARY OF “BUDOKAN” WITH SHOWS IN NYC AND L.A.

GUITARIST GARY HOLT SAYS HE WILL NOT QUIT EXODUS FOR SLAYER ›