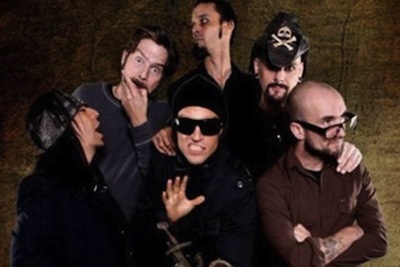 ﻿﻿Following their highly successful US/UK tours in support of their most recent Shoot EP, Minneapolis industrial mob American Head Charge announce their long-­‐awaited fourth full length studio album, set for release in 2014. In connection with the new record, the band have announced an Indiegogo campaign to give fans the chance to contribute to their first studio album in nine years,and the band are offering some incredible incentives.

The incentives include signed CD’s, guitar lessons, a night out on the town in Las Vegas with the band, band members coming to your house to cook you dinner and even the chance to have the band play a show just for you.

The link to the Indiegogo campaign and a list of the brilliant offers can be found here.

Vocalist Cameron Heacock commented: “We are more than excited to get into the studio and work with producer Dave Fortman (Slipknot, Mudvayne) on our upcoming crowd-­‐funded record. The music industry is such a different place these days, and we’d much rather have our fans in charge of the record as opposed to a bunch of suits whose only interest is the bottom line. Indiegogo, and crowd-­‐funding options, have made this a possibility, and we’re taking full advantage of it.” American Head Charge were  formed in 1998 by bassist, Chad Hanks and vocalist, Cameron Heacock and since their formation they’ve released three records, one compilation/DVD, and one EP, the most successful being the Rick Rubin produced The War Of Art. They’ve shared stages with the likes of Slipknot, Rammstein, Ministry, System Of A Down and Slayer, headlined sell-­‐out tours across the world and played as part of countless high profile festivals, and will be appearing at Download 2014.

LILLIAN AXE TO RELEASE LIVE ACOUSTIC ALBUM THIS MAY ›