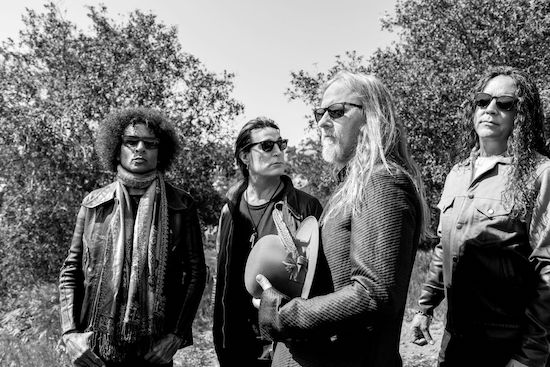 Earlier this year, Alice In Chains released Rainier Fog (BMG), their first album in five years. It hit number one on Billboard’s Rock, Alternative and Hard Music Charts and number one on the iTunes Rock Album Chart and has now earned them a much-deserved Grammy nomination for “Best Rock Album.”

Today the band has announced a special Rainier Fog movie project titled Black Antenna, produced and directed by filmmaker Adam Mason. Inspired by the sound of Rainier Fog, Mason has created a stunning 90-minute sci-fi film which will be rolled out in ten episodic segments/videos beginning at the top of the new year, with each episode set to a different song from the album. A Black Antenna preview can be seen below.

“I’m a longtime fan of the band,” says Mason. “And this was an opportunity to do something fresh and inspiring from an indie filmmaking side. The sound and vision between album and film are closely intertwined – it was a brilliant synergy that led to a really unique project.”

“We’ve always toyed with the idea of creating videos for every song on one of our albums,” says drummer Sean Kinney. “Not only did we do that for Rainier Fog, it got totally out of hand and we made a whole goddamn movie. Everything that will be seen in the videos will be footage from ‘Black Antenna’ to preface the complete film’s release.”

ACE FREHLEY DISCUSSING THE CURRENT VERSION OF KISS SAYS, “IT’S HALF OF A COVER BAND” ›