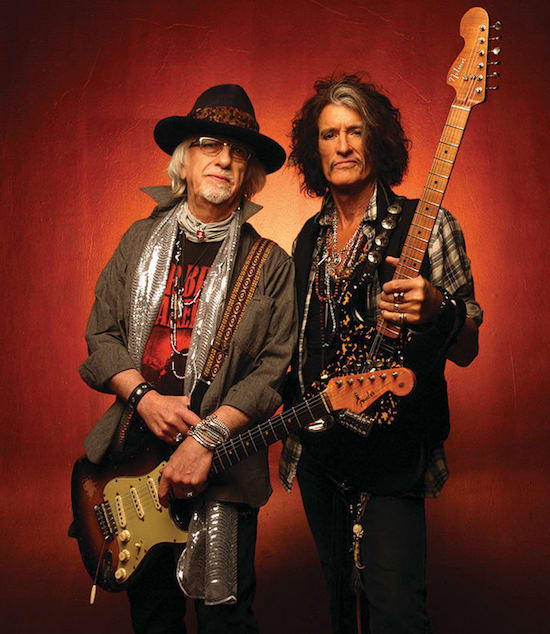 Guitar Player: As guys who have been playing rock and roll for almost half a century now, what do you think of the state of rock in 2019?

Perry: Rock definitely has its place alongside pop and dance and hip-hop and country and all of that. And to me, there’s this feeling of a resurgence, or at least of finding its level again. One thing we’re seeing is there are a lot of younger kids who want to see the real thing — the guys that played the music that they grew up listening to. And there are also a lot of talented younger bands that are coming up with good stuff. Whether they can take it to the next level, that remains to be seen. But I don’t think there will ever be another earth-shaking event like the Beatles. I mean, there could be, but I don’t know.

Whitford: This genre that we’re a part of, it seems like it’s pretty much been overfished. Like, how many great riffs are left? What can you do that sounds new or different? But then there’s a lot of young guys waving the rock flag, and they’re doing a great job at it. I like Rival Sons. They’re not new anymore, but they’re still new-ish. And I like Tyler Bryant & the Shakedown, Blackberry Smoke…guys like that. I feel like they’re doing it the way we did it, and with the same kind of spirit. So I hear a lot of stuff that’s really encouraging.

Perry: The way I see it, it might not be like the days when rock really ruled the roost, but, you know, if 20 percent of the people love rock and roll, 20 percent of the people now might mean 20 times as many people as it did 50 years ago, because there’s just that many more people in the world. And hell, half the good rock and roll I hear these days is in TV commercials. So it’s amazing to me how much the music has become part of the mainstream.

Guitar Player: Aerosmith have been touring pretty consistently over the past few years, but it’s been a while since we’ve heard new music from the band. Any chance a studio record is on the horizon?

Whitford: There’s been talk, but it’s just talk. It’s not like we’re sitting there and we’ve got 40 songs to cut. There’s not a lot of material on the table. But we could go in the studio and do something — do some covers, whatever. The key would be to keep it light and keep it fun. That’s what it’s supposed to be about, right?

Perry: I think by playing together in this sort of situation [The Deuces Are Wild Las Vegas Residency], where we don’t have to get to a different city every night and be in a different venue, it’s going to open up some doors to us getting into a creative mode again, just by changing the paradigm a little bit. So I actually think there’s a good chance something like a new record could come out of this experience.

Guitar Player: In 2017, you guys launched a tour called Aero-Verderci Baby!, which many speculated was a farewell outing. But clearly you’re still going strong. Is retirement something the band ever talks about?

Perry: We were thinking about it with that tour. We figured we’d just keep going until we got tired of it. But at one point, we were in South America for some shows, and the five of us were doing press, and none of us could say, “This will be the last tour.” We were all just looking at each other. When the reality of it hit, I was like, Wait a second — I can’t say those words. And I looked over at Steven, and he couldn’t say them either. And we kind of started laughing, because we were gearing this thing up to be the final tour and — well, it wasn’t. So I don’t know. I think after this run we’ll see what we want to do. Maybe we’ll want to more of this kind of stuff.

Whitford: Being players, the only thing that’s really going to stop us is some kind of physical ailment, where maybe we can’t perform the way we used to or can’t perform at all. We’re not there. And there doesn’t seem to be any reason to pack it up if people still would like to come out and see it. So I think we’re just going to keep playing until we can’t anymore. Why not? We all love doing it, so…