“AEROSMITH ROCKS DONINGTON 2014” DUE OUT SEPTEMBER 4TH ON MULTIPLE FORMATS 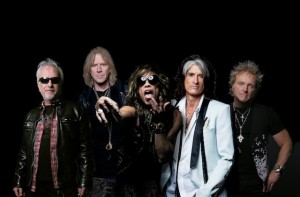 As Aerosmith gears up for their 2015 summer tour, a date has been announced for the release of Aerosmith Rocks Donington 2014. Due out September 4th, the 20-song collection captures the legendary Rock and Roll Hall of Famers delivering a scorching career-spanning show at the famed Donington Park in Leicestershire, UK in June 2014. Filmed in high definition, the critically acclaimed concert film–which premiered in February with a highly successful nationwide theatrical run–will be available on multiple formats: Blu-ray+2CD, DVD+2CD, DVD+3LP and digital formats for North America and DVD, Blu-ray, DVD+2CD, DVD+3LP and digital formats for ROW/Europe. Details about a special pre-sale–with bonus items–of Aerosmith Rocks Donington 2014 will be available in the coming weeks.

Headlining the massive Download Festival as part of the band’s Let Rock Rule tour, Steven Tyler, Joe Perry, Joey Kramer, Tom Hamilton, and Brad Whitford unleashed supercharged versions of Love In An Elevator, Janie’s Got A Gun, I Don’t Wanna Miss A Thing, Dude Looks Like A Lady, Walk This Way, Dream On, Sweet Emotion, Toys In The Attic, Mama Kin, and many more. Watch a trailer below.

“It’s always an absolute hoot that leaves me howling at the moon, performing at Donington we couldn’t have had a better time on stage that night,” says Steven Tyler. “I could feel the vibes of all the greats pulsing through the stage like AC/DC, Rage Against the Machine, Metallica and so many more.”

“We have played Donington many times but this performance was one of our best,” recalls Joe Perry. “Thanks to our fans who were there who helped us make it a night to remember. We are proud to have it be part of this theatrical series and it will give our fans who weren’t there around the world a chance to relive an ass kicking night of rock and roll.”

“We’re really proud and grateful to have been chosen to headline the Download festival at Donington for 2014,” Tom Hamilton adds. “It was an awesome experience and I think this film captures it. Special thanks to the insane fans who stuck with us through mud and rain.”

“I’m grateful to have been able to play this show at Donington,” says Joey Kramer. “I thought the band played great, the audience was great. That night was a very special time.”

“Playing in Donington has always been a highlight of the tour for us,” adds Brad Whitford. “The fervor of the crowd there is a sight to behold and this night was no different.”

Aerosmith on the web: 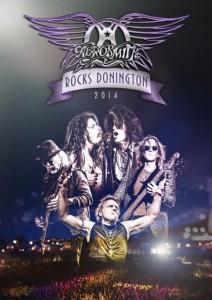