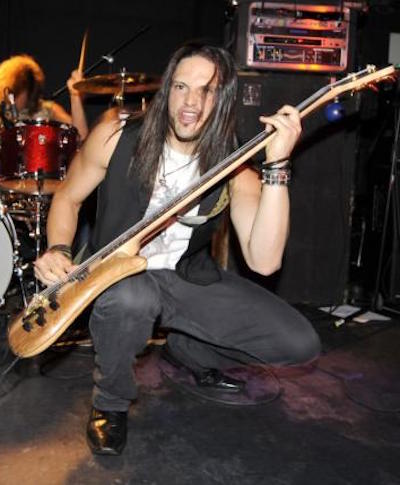 The bassist for New York-based metal band Adrenaline Mob was killed Friday following a three-car accident in Florida that left seven others injured.

David Zablidowsky, an accomplished musician who also enjoyed stints with the popular Trans-Siberian Orchestra and rock band ZO2, died after a tractor-trailer veered off the highway into two vehicles carrying members of Adrenaline Mob as they stopped to fix a flat tire, the Gainesville Sun and the Tampa Bay Times reports. He was 38.

News of the rocker’s death was confirmed on Twitter by radio host Eddie Trunk, who wrote that Zablidowsky was a “friend, great guy & musician. Always positive, always a smile.”

The band was headed to St. Petersburg from Biloxi, Miss., to play a show when they were struck in Micanopy, about 150 miles from their destination. Six members of the party were traveling in an RV, while two were in a GMC Sierra that was pulling a covered trailer containing music equipment.

The semi hit the vehicles after both pulled over to tend to the RV’s flat tire, and the RV burst into flames.

…The status of the injured is currently unknown, but Orlando’s girlfriend Dana Griffo clarified on Facebook late Friday night that Orlando, Allen, Cannata and Dressler were “banged up but ok.” She also wrote that she was “praying for” Campiglia, Revis and McCloe…

…Zablidowsky’s death leaves a hole in the hearts of fans who remember the long-haired rocker’s diverse repertoire. In addition to playing bass for Adrenaline Mob, Zablidowsky — known as David Z — played with the Trans-Siberian Orchestra, and toured with Joan Jett and the Blackhearts and SOTO. He was also in a band with his brother, Paul, called ZO2, that performed on the VH1 Rock the Nation tour in 2004, and an ’80s tribute band called Rubix Kube.

The Brooklyn-born Zablidowsky brothers were profiled by the Daily News in 2009 and most recently in 2011, when they formed the Rock Asylum Foundation, an organization that provides free rock concerts to New York public schools in an effort to inspire children to succeed in their education.

“Because we don’t look like a kids band, I think that grabs the kids’ attention and works to our advantage,” David told The News at the time. “And let’s not forget that music is universal. When it’s used properly, it really forms the connection between inspiration and education.”

Paul Zablidowsky posted an emotional message on Facebook in tribute to his late brother.

“A piece of our hearts has been taken from us today and we are figuring out how to deal with this as a family,” he wrote. “Please give us time and space to mourn and we will keep you posted when we can. Thank you for all your kind thoughts and prayers.”