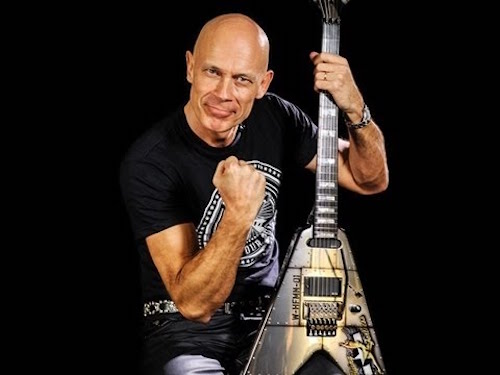 Metal Titans: To clarify you have a live DVD titled Restless & Live coming in January [2017], right? I ask this because you also added a live DVD as the bonus to the last album Blind Rage. The bonus DVD on that album was filmed in Chile.

Wolf Hoffmann: I can tell you this; Restless & Live is a package with three round discs! [laughs] One is a complete live performance on DVD; filmed in Germany, multi-camera and it was filmed at a European festival called Bang Your Head. It’s full production, great quality and the full show. The CDs are live material from shows from various shows all across Europe. I think it’s like an addition 27 songs of material.

Metal Titans: Will there be any select U.S. dates to promote Restless & Live or are you aiming to use this as a means to tide fans over between albums?

Wolf Hoffmann: That’s exactly what it is. We did this just for the fans until the next album is released. We toured a lot more behind the Blind Rage album, we have a couple new members and it’s going to be a few months before we have new material released. We felt that Restless & Live was a great release between [studio] records. As I said we are working on new material and the new studio album will be released next year. At the moment we’re looking at July or August [2017].

It should be released then but as you know sometimes things change. After we release the next album we begin our touring cycle which we’re hoping brings us to the U.S. this time around. I’m desperately hoping [to tour the U.S.] because it has been so long.

Metal Titans: That’s right because you were out in the Northwest when you promoted ‘Blood of the Nations’ then again behind ‘Stalingrad’ that was a co-headline with Kreator but nothing for ‘Blind Rage.’ That was a disappointment but that has nothing to do with the band but rather more to do with the promoters who book bands.

Wolf Hoffmann: It is or then there’s a timing issue. If you’re committed to touring somewhere else then it makes it impossible. Touring the U.S. has completely changed; touring the U.S. 6-8 weeks like we have done in the past has become harder and harder to do. There are some markets that just don’t…the ticket sales aren’t there and the promoters don’t want to take the risk.

We are happy to play wherever anyone books us; the last few years we have been concentrating on shows in California and on the East coast. There’s all these other markets that we’d love to play in between too…So we’ll put the feelers out and spread the word and see what happens. Fans ask us why don’t you ever come to Portland? Well it’s not like we can jump on a plane and ‘just play’ in Portland? It doesn’t work that way! [laughs] Fans don’t understand that it needs to be planned out months in advance and it has to coincide with other stuff.

Metal Titans:…has there ever been discussion of recutting some of the classics in studio with Mark? Not as a standalone release but more as bonus cuts?

Wolf Hoffmann: [long pause] It has been discussed but I’m not really sure that it would be a good idea? [long pause] I have heard where other people have done that; it’s been in circumstances where the label owns their masters. The idea is if you re-record it then it’s yours and you can license it for commercial use. I don’t know…I don’t really see the point? I’ll be honest I’d much rather spend my time writing and creating new stuff. I imagine if you really want to hear what the old songs sound performed by this Accept you can pick up Restless & Live and you can do that.

Watch a live clip of Stampede from Restless & Live, here.