WHITESNAKE’S “GREATEST HITS” HAVE BEEN REVISED, REMIXED AND REMASTERED FOR 2022 COLLECTION 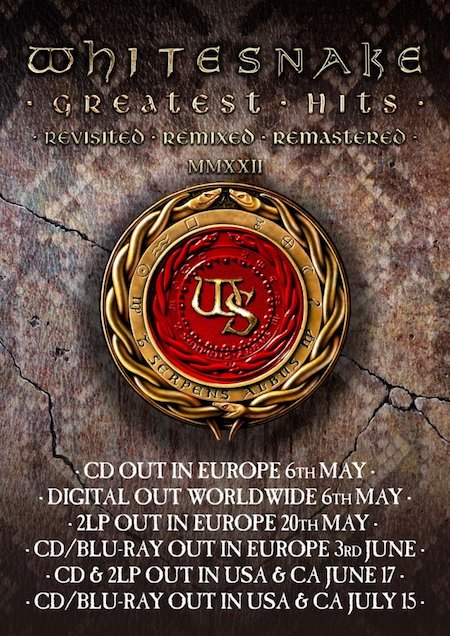 Whitesnake continues to revisit its multi-platinum career as it remixes some of its biggest hits for a new collection, Greatest Hits, which was made available on May 6th on digital and streaming services.

Whitesnake founder and lead singer David Coverdale had 16 tracks remixed and remastered for this collection. He explains: “We’ve definitely expanded on the original Greatest Hits, took them all out of the sonic time capsule of the ’80s and ’90s, and brought them up to date, sound-wise … as always, we have the original albums for those who consider them holy relics.”

Keyboardist Derek Sherinian (Dream Theater, Sons Of Apollo),who also appeared on Whitesnake’s recent Red, White And Blues trilogy, adds Hammond organ to more than half the songs on the collection. His scorching contributions can be heard on the Number One smash Here I Go Again, Fool For Your Loving, You’re Gonna Break My Heart Again and more. New performances by former Whitesnake guitarist Adrian Vandenberg can also be heard on The Deeper The Love and Judgement Day”from the 1989 album Slip Of The Tongue.

Along with those new additions, Coverdale also went back to the vault to unearth vintage performances by guitarist John Sykes that didn’t appear on the original recordings, including a solo on Slide It In and rhythm guitar on Give Me All Your Love.

Greatest Hits focuses extensively on three blockbuster albums the band released during the 1980s: 1984’s Slide It In (double platinum), 1987’s Whitesnake (eight times platinum),and 1989’s Slip Of The Tongue(platinum). But the collection goes deeper with songs like Sweet Lady Luck, a B-side on the 12-inch single for The Deeper The Love and Forevermore, the title track from the band’s 2011 album.