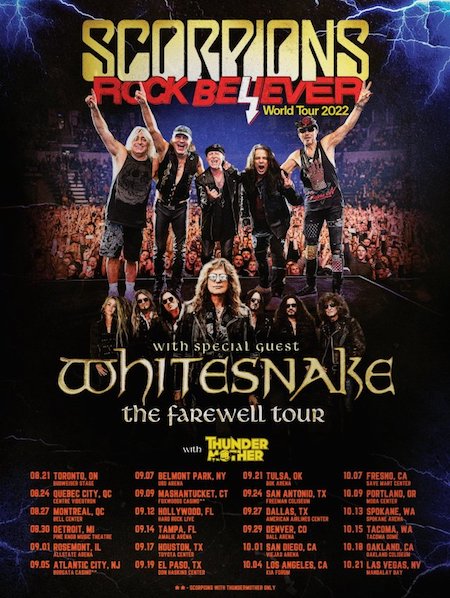 Scorpions, one of the most iconic and influential hard rock bands of all time, will return to North America on the Rock Believer world tour with special guests Whitesnake on the David Coverdale-fronted outfit’s farewell tour.

Fresh off of their sold-out Sin City Nights Las Vegas residency, Scorpions will begin the two-month-long Live Nation-produced run of dates on August 14th in Toronto, with additional concerts in Los Angeles, Detroit, Chicago, Dallas, and Denver, among others. In addition to Whitesnake, Swedish band Thundermother will be joining the tour.

Scorpions frontman Klaus Meine said, “After the amazing start we’ve had with our residency in Las Vegas, it’s about time to come back for a real tour to rock the U.S. like a hurricane again. We can’t wait to see all you rock believers out there.”

Coverdale added, “Once again it’s time to feel the sting of the Scorpions and the bite of the Whitesnake. Can’t Wait!!!”

Last July, Whitesnake announced that it had enlisted Croatian singer/multi-instrumentalist Dino Jelusick for its upcoming tour. Jelusick is a member of multi-platinum selling band Trans-Siberian Orchestra and was previously part of Dirty Shirley (with George Lynch), Animal Drive and recorded with many others. The 29-year-old Dino has been singing, touring and recording since the age of five. Other than being a vocalist, his main instrument are keyboards but he also plays bass, guitar and drums. He finished music academy and did theater work.

Whitesnake had been touring in support of its latest album, Flesh & Blood, which was released in May 2019 through Frontiers Music Srl.

‹ WHITESNAKE’S “GREATEST HITS” HAVE BEEN REVISED, REMIXED AND REMASTERED FOR 2022 COLLECTION