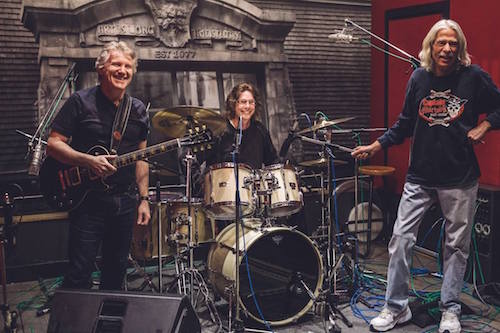 Jeb: Allied Forces is 35 years old this year. I was listening to it one day recently and I looked at the date and I was like… oh my God, where did the time go? Are you guys going to do anything special to celebrate or just let it slide by?

Gil: We might just let it slide by. You’re the first person that’s brought it up, so I should talk to Mike about it and say, “Hey, what are we going to do?”

Jeb: I was hoping you would tell me you were going to play together for the anniversary!

Gil: You never know, something like that might happen, I don’t mean like a tour or anything, but I just mean, maybe for some charitable cause or something, playing a track or two wouldn’t be a bad idea. I mean it’s easy for Rik because his chops are great. He actually plays guitar better now than he ever has in his whole life, he just keeps getting better. So, it would just be a case of Mike and me rehearsing and learning a couple of songs and stuff. I’m the one who’s really the hold-back because I’m so busy with Metalworks stuff. We’ll see, it might happen…

Jeb: How did you decide -and you’ve been asked this probably for 35 years since the album- how did you guys decide who was going to sing which song?

Occasionally we’d make mistakes. I’d sing a song that he probably should have sung or vice versa, but most of the time I think we got it right.

Some of Rik’s vocals were unbelievable, like the vocal in Fight the Good Fight for example, to me that was… I think if somebody says to me, “What was the best Rik Emmitt vocal of all time?” I’d be going, well there are a lot of them. Fight the Good Fight was one. Blinding Light Show was another.

He’s got some vocals that I don’t think the songs suited him. A lot of the songs that I did suited me. That’s the trouble for every vocalist…

‹ BLACK SABBATH TO RELEASE A DELUXE EDITION OF “PARANOID”