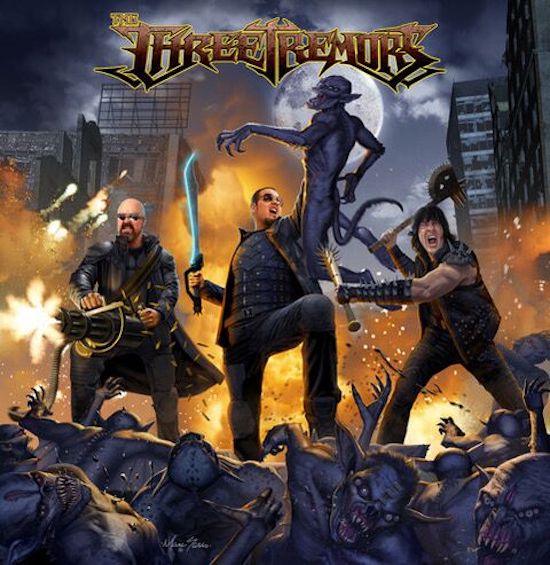 When the Last Scream Fades:

Invaders from the Sky:

The album will include twelve original songs total (over 60 minutes of music), and features all three singers on every track. A blend of songs that cover all the different heavy metal styles, the album features some of the most incredible metal vocal performances ever put to tape. Also included is cover art by Marc Sasso (who has previously worked with the likes of Dio, Halford, Cage, and Adrenaline Mob), while the CD will feature a 16-track digi-book, packed with incredible visuals and artwork.

“We couldn’t be more fired up for the album to finally be released. We just got off our European tour and after playing the entire album live for 17 shows, we saw the reaction of the fans to these songs. It was incredible and so we have good reason to be excited for the rest of the metal world to experience this celebration of heavy metal!, said Sean.

“This record is a throw-back to the glory days of heavy metal. It will make you feel like you are in high school again!” – Harry This is one for the true metal fans. I think this will exceed even their highest expectations. Great stuff!, adds Ripper.

Fans should also note that several special purchasing options are available via Pledge Music, which include bundles, shirts, patches, and other must-haves, please click here for more information.

Fresh off of a European tour of 10 countries to promote the release of the album (where the album was performed live in its entirety to rave reviews), the Three Tremors nourish in heavy metal anthems, and feature the illustrious chops of guitarist Dave Conan Garcia, whose tenacity fuels the fire, allowing the music to naturally flow in complimentary tone. Second guitarist Casey Trask picks up the pace and pushes the boundaries alongside bassist Alex Pickard, who highlights a melodic sensibility giving character to the overall tonality. On drums, the thrash machine Sean Elg adds in his perfectly placed fills and signature double bass patterns.

And in 2019, metalheads will finally get to hear what will undoubtedly be one of the most vocal-heavy metal releases of all-time, by the Three Tremors.

‹ GUITARIST JAKE E. LEE ON HIS WORK ETHIC, “I WOULD NEVER DO [SOMETHING I DON’T WANT TO JUST] FOR MONEY”