The Scorpions will release a tour edition of 2015’s, Return To Forever, on April 22nd, in North America.

The expanded version features seven bonus songs along side the original record, plus two brand new live DVD’s presenting two complete concerts from last year. One from the French Hellfest, and the other from the Barclay’s Center in Brooklyn.

The April release coincides with The Scorpions Las Vegas residency this Spring.

Blacked Out In Vegas is a five night run at The Joint at the Hard Rock Casino in May, with special guest, Queensryche. 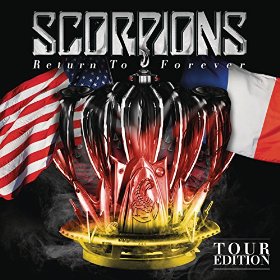 ‹ FORMER WIFE OF KISS DRUMMER, PETER CRISS, SAYS HIS BOOK IS “NOT ACCURATE”

LITA FORD DISHES ON TONY IOMMI, JON BON JOVI, RICHIE SAMBORA, AND OTHERS, IN HER BOOK, “LIVING LIKE A RUNAWAY” ›