THE LEGEND OF LEMMY KILMISTER LIVES ON

When rock icon Lemmy was fired from the psychedelic UK band Hawkwind in 1975 for a series of troubling incidents — including almost missing a show in order to hook up with a groupie in Chicago because she had crystal meth, and getting arrested at the Canadian border for possessing speed — he was so upset and angry, he wanted payback.

So he decided to seduce his bandmates’ wives and girlfriends.

“I got my revenge,” Lemmy, who died in 2015 at age 70, told rock interviewer Wall in a raucous tale of his life of excess (Lemmy: The Definitive Biography by Mick Wall).

“I came home and f−−−ed all their old ladies. I made sure of [bandmates] Simon King and Alan Powell’s first. Alan Powell has still never forgiven me. And I hope he never will, cos there was a lot of malice involved, and I really meant every f−−−ing minute of it…”

…Much of the book is based on extensive conversations Wall had with Lemmy over the years, a smart approach, as the rocker’s personality shines through in every quote. Wall refers to him as “a Great British eccentric,” noting that he was “beloved of strangers and yet a stranger to” many of his real friends.

Lemmy, who wore one pair of black pants for 25 years, was an unabashed speed freak until his final days. In the 1970s, when (false) rumors spread that Keith Richards had had his blood drained and replaced with newer, healthier blood, Lemmy’s manager reportedly considered the same procedure for his client.

According to Lemmy, they took him to a doctor, who found his blood so awash in drugs, he was told not to mess with it.

“He took a blood test,” Lemmy said. “We went back a week later for the results and he said, ‘Whatever you do, don’t give him whole blood, it will probably kill him!’ My blood at the time had evolved into some sort of organic soup — all kinds of trace elements in it.” (For the record, while Lemmy told this story many times over the years, his manager denied it.)

Lemmy’s parents split shortly after his birth for reasons he never learned. He only met his father once, when he was 25 and already a speed-sniffing rocker…

…Lemmy shunned relationships almost completely. He claimed to have slept with between 1,000 and 2,000 women, and one in the late ’60s, named Tracey, angered Lemmy by informing him she was pregnant, causing him to storm off.

He next saw her six years later, when they coincidentally showed up at the same coke dealer’s apartment. She later brought her son, Paul Inder, to see Lemmy play, and while Paul sat on stage, beyond excited watching his dad, the rock star wouldn’t acknowledge him.

“Have you ever changed a diaper,” Lemmy once said. “It’s rotten. As a lifestyle, it sucks. I could never imagine looking at the same face over the cornflakes for the rest of my life. I don’t know how people do it…”

…A friend of his named Morat told of a conversation he had with the icon about his speed use in his final days.

Purchase a copy of Lemmy: The Definitive Biography at Amazon. 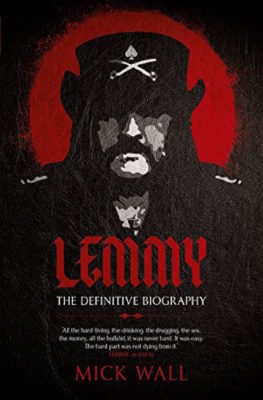 11/28: BACK FOR ANOTHER WEEK OF LIVE RADIO ON SIRIUSXM, MERCH SALE, MORE ›