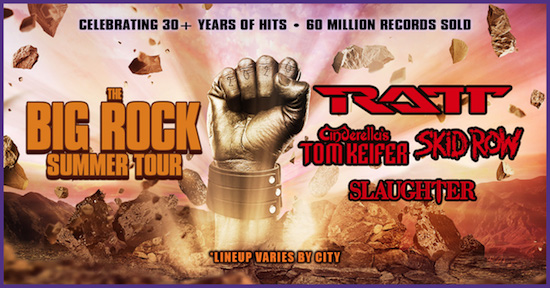 “We’re looking forward to layin’ it down on The Big Rock Summer Tour. The band is firing on all cylinders and more than ready for the shows with some great bands. Let the games begin,” says Stephen Pearcy of Ratt.

“We are celebrating 30 years of kick ass rock with Ratt, Skid Row and Slaughter this summer, and promise to bring a 100% live, loud, leave it all on the stage, #keiferband style rock show in every city The Big Rock Summer Tour comes to! See y’all at the show.” adds Cinderella’s Tom Keifer.

“This is more than an incredible summer tour with four killer bands and three decades of hits. It’s a traveling rock and roll circus with friends we’ve known for more than 30 years. And we are ready to tear s–t up,” says Rachel Bolan of Skid Row.

Finally, Slaughter goes on to say, “Unleash three decades of killer music and let the soundtrack of the summertime begin. We’re looking forward to lighting up the stage with all the bands and you rock and roll maniacs. Get loud. Get crazy. And get ready for The Big Rock Summer Tour. It’s gonna be one wild ride.”