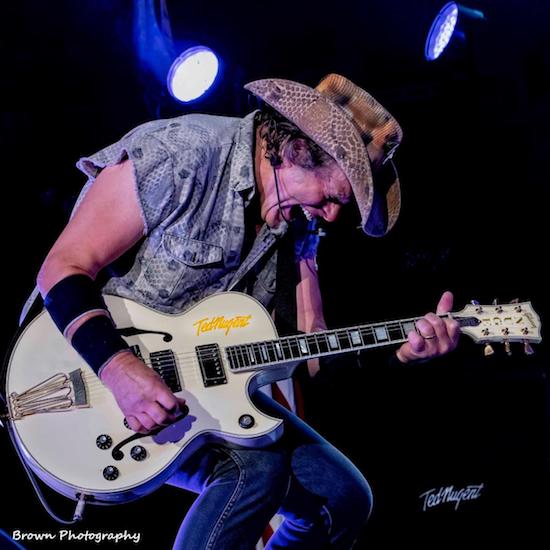 On August 11th, Ted Nugent was a guest on Eddie’s Sirius/XM show, Trunk Nation With Eddie Trunk, where he discussed his friendship with guitar icon, Eddie Van Halen.

Nugent said (as per blabbermouth.net), “What a great man he was. What a force to reckon with, how he enriched our lives with his musical genius.

And let me clarify, in case Howard Stern, his lying punks are listening, because they made up a dirty f-king lie on The Howard Stern Show, that I was jealous of Eddie and that we had a contention because of the way we played guitar. What a bunch of f–king liars.”

“Eddie and I were dear friends,” Ted continued. “When Eddie became clean and sober, guess who his first phone call was. To me. Because I lovingly prodded him to get the drugs and alcohol and tobacco out of his life. I did it in a loving way, and he was resistant, as most people are, but we had a wonderful relationship.”

The Motorcity Madman also recalled a conversation he had with Van Halen when the band first opened for him 45 years ago.

“On that stage, I was fascinated to see what this guy was doing with a handmade guitar, back in ’77,” Nugent said. “And I went up and I said, ‘Hi, Eddie. I’m Ted. What is this rig? It’s awesome.’ And he whipped out those unbelievable, unique licks of his. And he handed me his guitar. And even though it was this unique rig and the amplification and all these effects and just one of a kind, as soon as I started playing his bastard Stratocaster, it sounded like me, because of the way I touch the instrument. But, not quite like a [Gibson] Birdland, because a Birdland just feeds back uncontrollably [laughs] — it’s like an angry, pissed off beast. And I handed him the Birdland and it fed back and fed back.”

“But here’s the takeaway, it’s in the hands and in the heart. It’s in the spirit of the musician,” he continued. “And when Eddie played my Birdland, and I was able to back it down a little bit so it wasn’t so out-of-control feedback, on my Gibson Birdland through my Fender amps, it sounded like Eddie f–king Van Halen, because he is it. And even with his rig — I would play some of my licks; I played the Cat Scratch lick and I played the Free-For-All lick — it sounded like Ted f–king Nugent.”

“But my point is: Eddie Van Halen, we all worship the gift he gave us,” Nugent added. “There was never a negative moment between Eddie and I. He and I got along just great. And we loved the same kind of music. And he had a miraculous touch on the guitar, and I had my own touch. And that moment, with those two different guitars and two different rigs, it proves that it really is in the hands of the individual. And it was a great, great moment. I cherish that moment.”

Three months ago, Nugent named Van Halen the best guitar player he has ever seen. “He was so diverse in not only his histrionics but his groove,” he said about Eddie. “He had an unbelievable organic sense of rhythm in his delivery of not just exciting lead guitar parts but his grind of a grooving rhythm as a white kid. He really defied the history of who can groove like that. ‘Cause I come from the world of the funk brothers of Motown, so I know what the gods of groove look and sound like. And Eddie Van Halen, the times I jammed with him, and just listening to the records, you can tell he had an unbelievable, uncanny Superman sense of rhythm beyond just his outrageous athleticism on the guitar neck.”

Nugent’s latest album, Detroit Muscle, on on April 29th. To read more about this release, and to listen to the first single,

Nugent’s latest album, Detroit Muscle, on on April 29th. To read more about this release, and to listen to the first single,

Nugent’s latest album, Detroit Muscle, on on April 29th. To read more about this release, and to listen to the first single, Come And Take It, please go here.