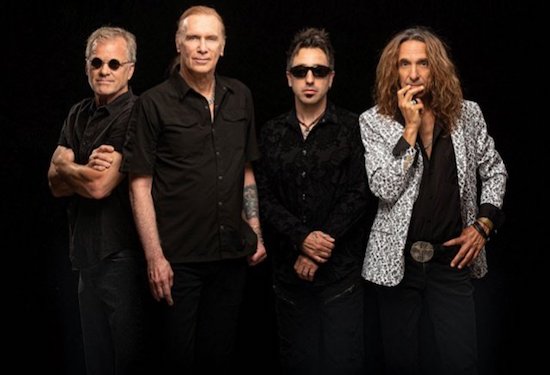 Talas has released a new song, Inner Mounting Flame, featuring vocals by the late frontman Phil Naro, who passed away in May 2021. The track is a tour de force of hard rock teetering on metal. Inner Mounting Flame marks Talas’ first taste of new music since 1984’s Live Speed On Ice.

Helmed by world renowned bassist Billy Sheehan, Talas is a unique blend of 1980s hard rock infused with the headbanging of modern metal. Cutting through this cacophony of sound is the unmistakable voice of Naro who delivered a performance for the ages.

Sheehan states, “‘Inner Mounting Flame is a bombastic, high-speed chaos of adrenaline that we would often use as our opening song at the live Talas shows in 1985. We stayed close to the original arrangement.

This was such a blast to record, and Phil sang his ass off on it. The song title came from a very famous fusion band’s album title (The Mahavishnu Orchestra – Inner Mounting Flame) and was our take on what that flame might be about.”

Produced by Sheehan, Russ Mackay, Scott Bush and Talas, Inner Mounting Flame is a rocker reminiscent of the Buffalo band’s long storied history which began in the 1970s.

Kings of the Buffalo bar circuit, Talas slogged it out through the 1970s and 1980s, hoping for the breakthrough that never quite came. When David Lee Roth left Van Halen, Sheehan immediately joined Roth’s band, putting an effective end to Talas.

In 2017, Sheehan rerformed Talas with a lineup featuring Phil Naro and Mark Miller, along with new member Kire Najdovski, to play at the Bands At Barnard charity event in Greece. The group has played sporadic shows since then.