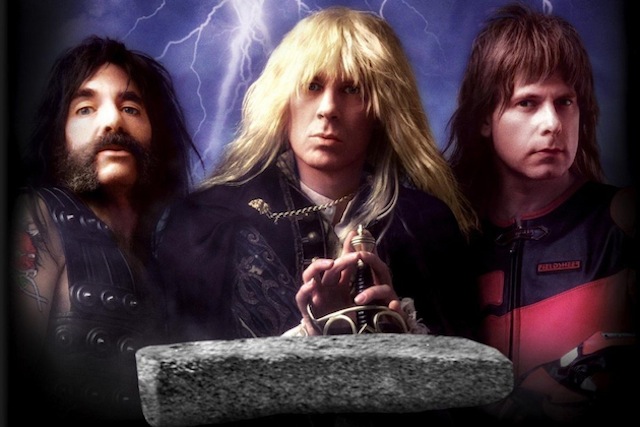 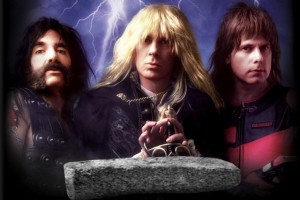 Spinal Tap may have been based on a fictitious band, but Jeff Suwak and Ed Pearce of Songfacts have created a list of real bands that they think are most like Spinal Tap. What follows is their criteria and then which bands made their Top Ten list.

2) Internal Strife: Core members went from best of friends to worst of enemies… and sometimes back.

4) Armadillos in Trousers: Spinal Tap’s audience predominately consisted of teenage boys. This is, of course, almost inexplicable, considering the talent, depth, and sexual magnetism of the band.

8) English: Meaning a band from England

11) Two Artistic Visionaries: A dynamic duo that were clearly the creative engine.

12) Hippie Phase: Went through a period when they embraced flower power.

And now the Top 10 bands most like Spinal Tap:

*Hall of Fame hug notwithstanding, the tension between Courtney Love and the rest of Nirvana continues to this very day.

*During the 1992 MTV Video Music Awards, bassist Krist Novoselic threw his instrument about 25 feet into the air and caught it with his face in front of a live television audience.

*The naked children on the cover of Zeppelin’s 1973 album Houses of the Holy caused enough controversy that a new version with the children’s butts airbrushed out was put on shelves. The design was inspired by Arthur C. Clarke’s novel Childhood’s End.

*The armadillo bulge in Robert Plant’s pants was as much a part of the Led Zeppelin concert experience as the smell of reefer and the sound of John Bonham’s gong.

*Rising from the ashes of The Yardbirds, Led Zeppelin comprised Jimmy Page and John Paul Jones who both hailed from the London suburbs, and Robert Plant and John Bonham who both were born and bred in the Birmingham area.

*The beef between Vince Neil and Tommy Lee kicked up plenty of dirt. When the band got back together in 2005, Neil explained: “I don’t like Tommy and Tommy doesn’t like me. Tommy doesn’t care to resolve things. I don’t care. I have no feelings about it either way. You go to work and there’s a guy in the office you don’t like. You still do your job.”

*Drummer Tommy Lee has, perhaps, the most notorious armadillo in rock history.

*At a 2005 concert in Casper, Wyoming, Tommy Lee was burned by pyrotechnics as he hung suspended from a wire above the stage.

*The original cover for the band’s 1987 Appetite for Destruction album, a classic of the genre, courted controversy with cover artwork showing what appeared to be a robot rapist standing over a recent victim.

*Guns N’ Roses was torn apart by the egos and differing styles of its two key members. In discussing he band’s breakup, Axl Rose stated, “It was really a fight with me and Slash. Izzy [Stradlin] was doing the same thing, but the fight with me and Slash started the day I met him. He came in, popped my tape out and put his in and wanted me in his band. And I didn’t want to join his band. We’ve had that war since Day 1.”

*Steven Adler and Matt Sorum served during the golden age of GnR, but they have had four other drummers, bringing their total to six.

*One night in 1992 in Montreal, co-headliner Metallica took the stage before Guns N’ Roses. During that performance, James Hetfield was injured by pyrotechnics and had to end the band’s set, aggravating an apparently edgy crowd. Guns N’ Roses then took two hours to start playing. When they finally took the stage, they discovered that the sound equipment was improperly set up so that they couldn’t hear themselves. This, along with Axl’s sore throat, prompted them to cut the set short. The combination of both headlining bands failing to deliver sent the crowd into a riot – as in, a literal riot.

*Gwar doesn’t just have inexplicably bizarre and elaborate stage props; it could actually be argued that the entire band is an inexplicable, bizarre, and elaborate stage prop. They have even been known to occasionally decapitate a walking effigy of Prime Minister Tony Abbot. The headless figure spewed a stream of blood all over the audience. As brilliant as the sight is, it’s pretty much par for Gwar’s course.

*Gwar is so big in Japan that they even have a separate Japanese website, a fact that surprises no one. Gwar and Japanese pop culture are pretty much made for each other.

*Gwar resulted from vocalist and bassist Dave Brockie meeting movie-maker Hunter Jackson. The two visionaries came up with the concept for Gwar, and the rest is history.

*Their stage props have seen the whole spectrum of inexplicability. From a gigantic, monstrous head looking over the crowd to the bearded face of a man with torn-out eyes impressed upon an image of outer space, they’ve got this category nice and cinched up. Lead singer Rob Halford also wore for a time a leather jacket bristling with spikes so long and sharp that they nearly took out Steven Tyler’s eye when the two of them moved in for a photo op.

*Judas Priest hails from the English midland city of Birmingham.

*Priest has cycled through eight stickmen, including six in the ’70s. None fell victim to spontaneous combustion, however.

*Rob Halford regularly rode a motorcycle onto the stage for Judas Priest sets. In 1990, things went wrong when a misplaced stage prop knocked him off the bike, breaking his nose and knocking him unconscious.

*The band’s 1976 Virgin Killer album featured a nude 10-year-old girl. It was soon pulled from shelves and replaced with a different cover in some countries. The cover actually resurfaced in controversy in 2008, when the British Internet Watch Foundation tried to have its image removed from Wikipedia.

*The Scorpions’ 12 drummers earns the band TWO points for that category. Twelve drummers is just incredible.

*No other band on this list fits the “Big in Japan” qualification as well as the Scorpions. Their initial, modest sales success in Europe and the US was matched only by their inversely huge success in Japan, culminating in a 1978 tour of the country and the resulting, semi-legendary Tokyo Tapes album that followed.

*Guitarist Tony Iommi fired Ozzy Osbourne from the band because of the lead singer’s alcoholism, which was pretty impressive considering the band as a whole freely admits to extreme consumption during that period of their tenure. Ozzy reunited with the band in 1978 and has been playing with them ever since in an off-and-on fashion.

*Black Sabbath had an incident with inexplicable stage props that was eerily identical to one of Spinal Tap’s own, and led to yet another prominent stage mishap. It occurred on their 1983 Born Again tour after Geezer Butler suggested (unironically) a life-size Stonehenge for their stage set. To tie in with the album cover (a demonic, red baby), a little person was also part of the act. Ian Gillan explained in a 1994 Mojo magazine interview:

We hear this horrendous screaming sound – they’ve recorded a baby’s scream and flanged it – and suddenly; we see this dwarf crawling across the top of Stonehenge, then he stands up as the baby’s scream fades away and falls backwards off this 30-foot fiberglass replica of Stonehenge onto a big pile of mattresses. Then dong, dong — bells start toiling and all the roadies come across the front of the stage in monk’s cowls, at which point War Pigs starts up. By now we can see the kids are either in stitches or wincing in horror.

*With Black Sabbath, Judas Priest and half of Zeppelin, Birmingham can lay claim as the birthplace of heavy metal music and consequently is the motherland of Spinal Tap moments. Stonehenge fails are only part of its rich history, as the city was at the forefront of worldwide developments in science, technology and economic organization, producing a series of innovations that laid many of the foundations of modern industrial society.

*The band has had seven drummers over their lifespan, including some big names: Eric Singer (Kiss), Cozy Powell (Rainbow) and Terry Chimes (The Clash).

*Saxon was a “must” for this list. Harry Shearer, probably best known (except among his family and friends, we hope) for his role as Spinal Tap bass player Derek Smalls, traveled with Saxon as research for the film. For this reason, they get a special bonus here for providing direct research material for the film.

*They have had their fair share of inexplicable and strange stage attire. In the official Rock the Nations video, lead singer Biff Byford is wearing what can only be described as a futuristic version of a Redcoat’s uniform, offset by skintight silver pants and knee-high black boots.

*Saxon was quite big in Japan, where their single “Motorcycle Man” charted for six months.

*Saxon were formed in the South Yorkshire town of Barnsley in 1976. A former industrial town centered on coal mining and glassmaking, Barnsley has a tradition of brass bands, originally created as social clubs for its mining communities. Many factories also organized employees’ bands during Barnsley’s industrial peak. An employee would work at a job in the factory and then “double in brass” in the company band.

They had one of the most infamous banned album covers of all time with the “Butcher” cover of 1966’s Yesterday and Today, which featured a photo of the band covered in doll parts and raw meat. The cover was quickly pulled, and today copies of it can earn collectors several pretty pennies.

*When Brian Epstein died in 1967, The Beatles lost not just their manager, but also their peacemaker. Forced to make business decisions, Paul McCartney and John Lennon found themselves increasingly at odds, especially when it came to running their company, Apple Records. Tony Bramwell, an Apple employee, said it was “like being in the middle of a gigantic divorce.”

*In 1966, the city of Memphis canceled a Beatles concert in reaction to Lennon declaring that the band was “bigger than Jesus.”

*The band suffered girlfriend tensions, to say the least. History has shown her to be a staunch steward of John Lennon’s legacy and a woman of considerable talent, but Yoko Ono was so vilified at the time that many Beatles fans blamed her for the group’s breakup. She unfairly became the archetype of the meddling girlfriend who poisons the well.

*Formed in the northwest English city of Liverpool as the Blackjacks in 1957, John Lennon’s skittle group became the Quarrymen, Johnny and the Moondogs, the Silver Beatles and finally the Beatles.

*Lennon and McCartney were one of the most effective, powerful songwriting duos ever, true musical visionaries whose innovations had the whole of the rock world trying to catch up.

*John Lennon might have waited until after leaving the Beatles to go full hippie, but the band as a whole had more than its share of forays into flower-child culture. “All You Need is Love” was a veritable anthem of the movement. The band members even traveled to India to meditate with the Maharishi (an experience which inspired numerous Beatles songs, including “Sexy Sadie.”

*They earn this honor for their group therapy sessions, which involved exercises like trust falls and scrapbooking. Not only did they participate in these sessions, they documented them in their movie Some Kind Of Monster.

So, what did you think of their list and which bands do you think they omitted? Let us know in the comments section.