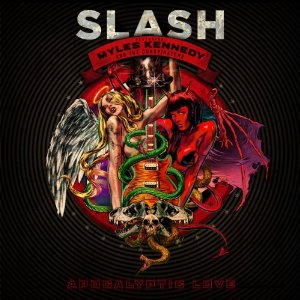 I loved the last Slash album, and my favorite songs were the ones with Myles Kennedy singing. So I was thrilled that the live band he had on that tour now is a real band and has made a full cohesive album of brilliant hard rock. They even have a name, The Conspirators. It’s clear that the couple year touring with Slash served this band well as this is the most band feeling album Slash has made in a long time. The sound is warm and live with Slash’s solos panned to one side and Myles Kennedy (a great guitarist in his own right) panned to the other. Todd Kerns and Brent Fitz are locked in as a rhythm section, holding down a tight pocket under Slash’s riffing and Kennedy’s soaring vocals. “Anastasia” an instant classic on this one. Other highlights include “Bad Rain”, “Standing In The Sun”, and “Halo” to name a few. To me this is Slash’s best work top to bottom since Appetite and the band is great live. Hope they build a great catalog with this group. If you are a Guns fan this album and band are probably more in line with that groups classic sound than anything else to come along since.