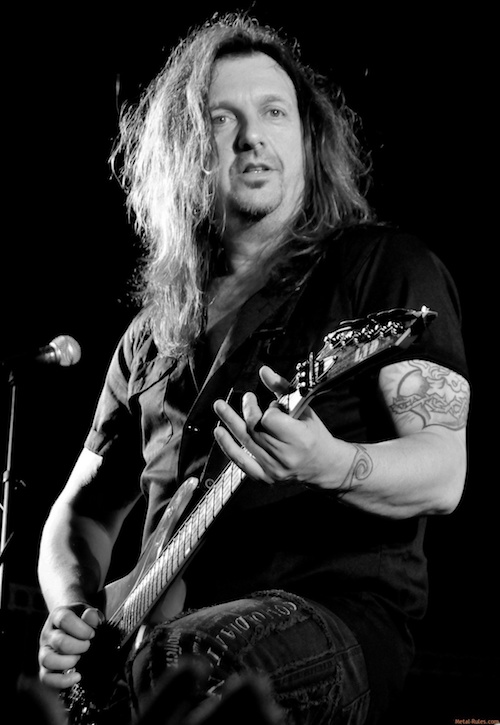 Discussing the potential reunion and why it never occurred:

“There was definitely dialog that was going back and forth and there was talk…I think everybody was entertaining the idea. And I think, really, what it ended up being was we realized that whatever it was that tore us apart years ago still existed…We got offered a lot of money. There was a lot of stuff that’s been said about what happened and tours being booked… That didn’t happen — tours were not booked. Any offers that came in came through to me and Rachel, ’cause it’s our band. So there was a good amount of money being offered. And then with the dialog that went back and forth, it got ugly again.”

Explaining that money was not an issue:

“[It] had nothing to do with money. I’ll tell you straight up — no one was making was more than anybody else. That was one of the things that we said… Rachel and I and Scotti, we were, like, ‘This is easy from that perspective.’ I’m not gonna sit there and do it any other way. It was more about control, I think. Other people having a desire to have more control over this thing than we were willing to give. And it was not about anything other than this is our band. This is not ego-driven, I promise you. It wasn’t about me making more money than you, or you making more… it wasn’t about that at all. I guess it was the personality conflicts that existed before, 20 years ago [that are still there].”

On Motley Crue managing to tour despite the band members differences:

“Yeah, but they were miserable — they were all miserable. And see, that’s the thing, man… I don’t know… I guess I look at it differently. I really like my life, man. I really like being happy. I have great joy playing Skid Row music now. Not to say that I didn’t before, but in this moment in time, I’m extremely happy. My life is awesome, my friends are awesome, the people I make music and jam with, they’re all awesome. And so, I’ve gotta say, yeah, the idea, the romantic notion of a reunion, and the monetary aspect of it, is all well and good, but at the end of the day, man, I really enjoy the space that I’m in…The way that we existed towards the end, after Subhuman Race and when everything fell apart, it was [a] misery for everybody — not just me; for everybody.”

On being proud of the band’s past:

“I’m so proud of everything that’s existed between 1986 and now. A lot of people, if they’re in a similar situation like we are — we have a new singer and new drummer we’ve had for a while — they tend to hide from their past and almost brush it aside. I embrace it. I’m so proud of what we created — the five original members. We had a period of nine, ten years that was… it was furious and crazy and awful and amazing and every adjective you can come up with, and it burned brightly. And then it died out. And sometimes that happens..And so for us, it was really… it wasn’t about money — never has been. Happiness has always been paramount to me…I love the fact that people care enough and have a history with the band that they would wanna see that exist again — I really do; I think it’s amazing, and I’m supremely flattered by that — I just can’t give it to ’em right now, and that’s just the way that it is.”

“We had known each other — Rachel, Scotti and I had known Tony for a long time. Obviously, a great singer. Some things just aren’t meant to work… they just don’t work together. Knowing him before and then working with him..it really was two different things. A lot of conflict, a lot of butting heads, and it just… it never meshed, it was never right. We knew him for a long time, [but we] never worked with him — never worked in a band situation, in a band environment with him…And so if someone is gonna come in and work with us, we have a certain way that we do things, and that may not work for some people. It didn’t work for him. Look, [he’s] a talented guy; it just wasn’t right for us.”

“He’s from Dragonforce. I was always familiar with the band and their reputation. Their music was never in my wheelhouse, so to speak. Rachel had become really good friends with him, and when things fell apart with Tony… We had previously done shows in the U.K. where his band after Dragonforce [I Am I] had opened up for us. And I saw him, and he’s a great singer. But I never thought about him being with Skid Row. As soon as everything fell apart with Tony, Rachel was, like, ‘Let’s just give ZP a call.’ And I’m, like, ‘Okay. Cool.’ And so we did. And he flew in.”

Look, first of all, he’s an excellent person — a really good guy. Blue collar, hard worker, gets his hands dirty. If he sees the crew guys having a problem with one of the road cases, he’s over there helping ’em. He wants to get in the trenches, he wants to work. And he respects the history of the band. He doesn’t attempt to do something so different to shy away from what our catalog is. He came in knowing… he came in and auditioned and did, like, 15, 16 songs. He used to warm up to our stuff. He’s really, really well versed and familiar with it. So this has been a really, really easy fit, and it’s been a pleasure to be on stage with him.”

On Sebastian Bach singing many of Skid Row’s songs at his live shows:

“I’m cool with it…as far as going out there and doing Skid Row songs, he has every right to — he sang ’em. I’m honored, to be honest with you. Some people might look at it differently. It doesn’t bother me. It helps keep our history alive. I’m cool with that.”

‹ WHAT MUSIC DO PSYCHOPATHS LIKE? MORE BIEBER, LESS BACH