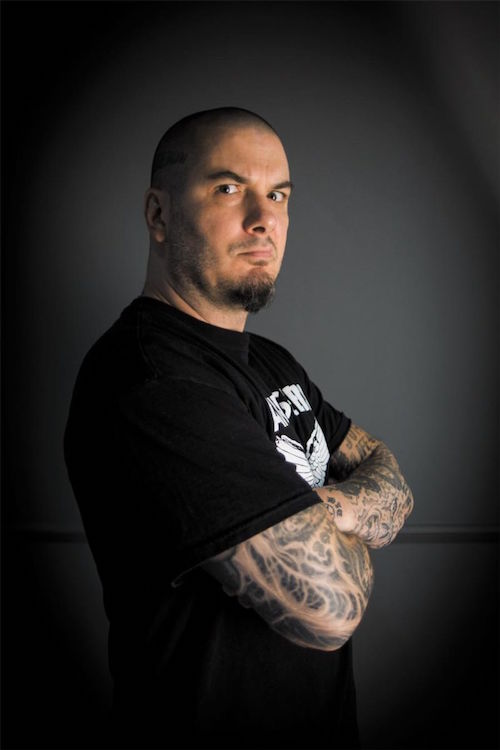 …[While talking with former Pantera frontman Phil Anselmo], he says he…identifies with marginalized people because of his upbringing. He grew up in New Orleans’ French Quarter – “That’s a diverse f–king crowd of people,” he says – and he was raised by a single mother who “dated black men and whatever and they were in my house that I lived in – they spent the night and all that – and all I had was f–king love for them.” His nanny when he was young, he says, was a transgender woman who was assigned male at birth named Wilma. “I loved her,” he says repeatedly. He points out that he uses the past tense when talking about her not because he no longer loves her, but because she is now dead.

“This is shit I’ve never f–king opened up about until now,” he says. “But when people constantly talk about being a victim or something, there are going to be certain points where I have to step back and go, ‘Whoa, whoa, whoa.’ Especially when people shout and scream about us living in a rape culture and men are this evil product. … Guess who was molested his entire child-f–king-hood by numerous people, both men and women. … ” He pauses, and lowers his chin to make eye contact. “Me.” He pauses again and sharpens his glare. “Me.”

Anselmo resituates himself, closing the bathroom door to let the heat build back up. “I’ve never told the world this, but I am now maybe because I’m almost 50 and I don’t give a f–k anymore,” he says. “But it happened. I never blamed the world for it like I’m seeing kids today do, putting everybody in one box. And the same thing goes for race and all this s–t.”

In addition to the scrutiny of the world at large, Anselmo also faced derision in the press from one of his former Pantera bandmates, drummer Vinnie Paul. A rift grew between them as the band broke up in the early 2000s and it has widened since an insane fan gunned down Dimebag Darrell at a 2004 concert by Darrell and Paul’s post-Pantera band Damageplan, as Paul alluded that Anselmo had stoked the killer by comments he made in the press. Paul has claimed he hasn’t seen Anselmo in person since 2001.

Earlier this year, when Paul was asked for a comment on Anselmo’s white-power salute, he was dismissive. “I can’t speak for him,” he said. “He’s done a lot of things that tarnish the image of what Pantera was back then and what it stood for and what it was all about. And it’s sad.”

Anselmo recoils at first when thinking about Paul’s comments, but soon turns dismissive. “Yeah, I saw that he said that but anything out of that dude’s mouth is … ugh … it seems sour,” he says. “I don’t have anything in common with that guy at all.” He pauses to find his words. “But Vince better be caref– …” He stops mid-word and seamlessly switches sentiments. “One day I’m really not gonna care about whatever the legacy of Pantera [is]. It’s great that we had such an awesome fan base and still continue to have this awesome fan base, but there will be probably be a whole lot of ’em that would be perhaps a little disappointed in my assessment of the whole situation. So I’ll just leave it at that. And that’s why I’m not going to speak out about it, even though I know when this interview comes out, people are going to say, ‘Well, you almost went off on that.’ And yeah, almost. Operative word.”

He says he’s careful with his words because he wonders about Paul’s mental well-being, even more than a decade after the fatal concert. “You have to worry about Vince’s state of mind, just like you have to worry about all of our states of mind,” he says. “I know in my heart I have to accept what happened to Dimebag because it’s just real. He’s gone. He was murdered. But there’s a giant chunk of me that will never understand it. I’ve spoken to the police about it. I’ve spoken to the cop that was on hand that ended things, murdered the murderer. I’m not sure I’ll ever understand it…”

…Anselmo has since resumed a regular working pace. He’s played live with Superjoint and they have a tour planned for next year. And he has announced the release of the Bill and Phil record, Songs of Darkness and Despair, which comes out January 20th and is a departure musically for him. The music, for which Anselmo plays guitar, straddles blues-rock and avant-rock with synthy detours, as Moseley – whose film credits include The Texas Chainsaw Massacre Part 2, Army of Darkness and The Devil’s Rejects – sings somewhat bizarre words.

“We’ve been friends for years, and we had a three-day weekend so we said we want to come up with six ridiculous songs,” Anselmo says. “The dude can sing. He’s got a great range. He’d come in with lyrics and I’d look at the title and say, ‘This is a ridiculous title, Bill…'”

…Anselmo also has many other releases he would like to put out in the coming year that range from sounds you would expect from him to what he calls “un-metal,” mellow songs which he will release under the name Illegals in Minor. “That stuff is heavy in its own right,” he says. “Extremities come in all genres. Like, there isn’t anybody alive that’s going to convince me that Björk ain’t extreme. So if it helps the project by using a cello or stand-up piano or a waterphone, then so be it. I’m going to use it.”

He opens the bathroom door so he can smoke again and likens the vibe of that music to Nick Cave, David Bowie and the Smiths and says he sings in his natural baritone. The lyrics deal with his lack of fear of death, something he says he knows about as he’s been declared medically dead more than once. “As a guy who’s croaked a few times, I’ll let you know straight up, there wasn’t much there,” he says with a laugh. “And if there was, it ain’t memorable. It was pretty peaceful from what I remember. The best way I could put it is if you could have memories of the safety of a womb, so to speak, it was something like that. But being resuscitated medically – the hecticness of that – it makes you think, ‘Damn, being dead was sure a lot easier than dealing with all this shit, man.'” He laughs.