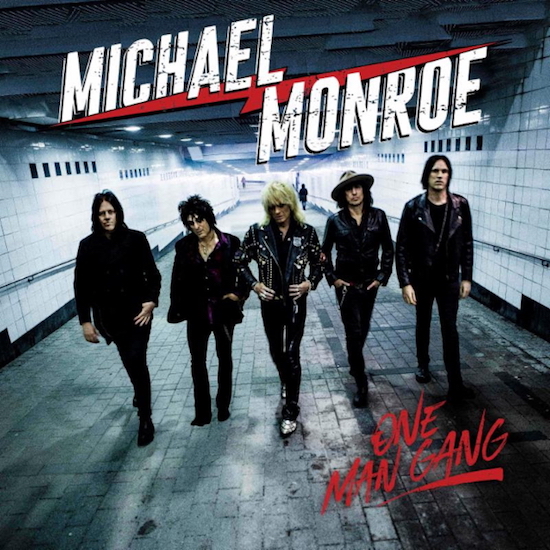 BraveWords: The new album is entitled One Man Gang. Yet, the cover is of a 5-man band.

Michael Monroe: To me, it was an obvious album title, because the band is called Michael Monroe, and my name is also the band’s name. So, we’re a gang – even though it’s one name. And also, as a personality, you can say, “Me, myself, and I.” Sometimes I’m a bunch of guys. But that’s the main reason why I thought it was cool – the band is Michael Monroe and it’s a solo thing, but also, it’s a band situation, really.

BraveWords: Is it true that you turned [Guns N’ Roses frontman] Axl Rose on to the music of the Dead Boys?

Michael Monroe: Yeah. They asked me to play [saxophone and harmonica] on the Use Your Illusion album. I was living in New York, and this happened in LA. Axl told me on the phone that he had never heard of the Dead Boys – I decided to make a cassette of the Dead Boys’ first two albums, and brought it over to him. When we were listening to the tape in his car driving in Hollywood, when he heard the song Ain’t It Fun, he went, “Wow! We’ve got to do this song! It’s great! Let’s do it was a duet.’ I thought that was so cool – to have it in memory of Stiv Bators in the credits. It was a tribute to Stiv, so I thought it was so cool – millions of their fans would see Stiv’s name on the record. In fact, I never asked for any money for that session…well, I got paid a session fee, for playing the harp and saxophone on that session. But I never wanted any money for the Dead Boys song, because I wanted to make sure there was no reason for them to take it off the album. I really wanted people to see Stiv’s name. To me, it was so important to have it there. It wasn’t a money thing – it was paying homage to Stiv Bators. Of course, I told them, ‘Spell my name right’ – and that’s it. [Laughs] I asked Axl, ‘Can we put it, “In Memory of Stiv Bators?” He said, “Yes. Of course.” But that was the first single off The Spaghetti Incident? album. I think it was magical that even Axl sounded like Stiv in places. Stiv was definitely there in spirit.

BraveWords: Are you still in touch with Axl Rose or any of the members of G n’ R?

Michael Monroe: Me and Slash have kept in close touch all these years. And Duff McKagan, too. Axl I haven’t seen that much, but last summer (2018) in Finland, we opened up for them – with the Darkness. When Slash’s solo thing played Finland, I’ve always ended up guesting at his show. On The Coneheads movie soundtrack, we did Magic Carpet Ride, back in the day. In fact, when we did that, there was a new arrangement that we also recorded – Slash recorded both versions. The reason why I wanted to do Steppenwolf is I was tired of people knowing only Born to be Wild, and they had other cool songs, too. We were planning on doing it the original way, like the original arrangement, and then I suggested this other arrangement, and we worked that out. Slash said, “Let’s record both versions and see what the record company chooses.” So, they picked the new arrangement to use on the movie soundtrack. The other version had Kenny Aronoff on drums and Sami Yaffa on bass. So, I had the other version on a cassette for all these years – since 1993. All these years, I never let anyone have a copy. And then in the meantime, in 2017, I put out a compilation, Michael Monroe: The Best, and it had some previously unreleased tracks on it. But I asked Slash, “Can I maybe use that other version on that?’” Which is probably the only one in existence. And he was so cool – he said to send it over, and he said it was OK to use it. He’s such a great guy. A sweetheart. A heart of gold. And he never changed – he’s always been extremely nice, considerate, and polite. He’s only gotten nicer. I love those guys. They’re great. I’m glad they’re as big as they are – because they’ve got the right idea, about doing the right kind of rock n’ roll.

BraveWords: Did you see the Mötley Crüe movie, The Dirt, and if so, what did you think of how Razzle was portrayed?

Michael Monroe: We’re going out to Europe in October. And then we’re going to England – starting October 30th. We’re planning on touring this album as much as possible. I don’t know about the States. We’ve done some tours in the States, and New York and LA are always great…we’ve kind of come to the conclusion that unless you can get a support slot with someone playing big arenas, then it’s kind of like hitting your head against the wall. Playing in clubs to a couple of hundred people or a hundred people a night, you’re not going to get anywhere. It will be a waste of money and a waste of time. Whenever we’ve played there, the audiences have been great and emotional. There are people there that really appreciate authentic, good rock ‘n’ roll. But it’s just a shame that the situation is such that country and hip-hop are happening there big time, and rock ‘n’ roll ain’t happening that much.

FORMER JUDAS PRIEST GUITARIST K.K. DOWNING SAYS HE WOULD LIKE TO PLAY WITH THE BAND SHOULD THEY GET INDUCTED INTO THE ROCK N’ ROLL HALL OF FAME ›