SINGER/GUITARIST RICHIE KOZTEN DISCUSSES RECORDING WITH IRON MAIDEN GUITARIST ADRIAN SMITH, HOW HE FIRST DISCOVERED EDDIE VAN HALEN AND OPENING FOR THE ROLLING STONES…YES, YOU READ THAT RIGHT…OPENING FOR THE STONES 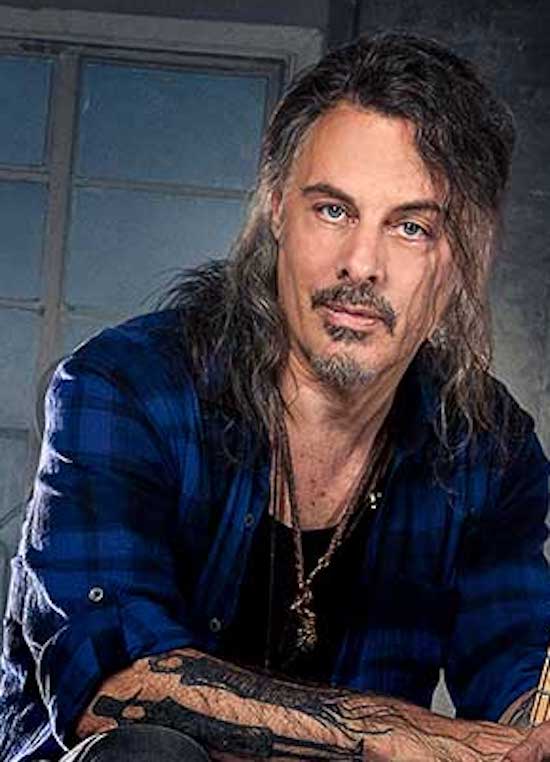 Niclas Müller-Hansen Sweden’s Rock Sverige of spoke with singer/guitarist/songwriter, [Dana’s note: and all around badass] Richie Kozten. Highlights from the interview appear below.

A: Well, we met almost ten years ago. It seems like the older I get, the more twisted memory becomes. We´ve known each other for quite some time. Adrian has a home in Malibu and my wife and I live close by to where his house is here in California. We would go over there for parties and such and he has a room in his house that is set up like a soundproofed jam room. We would all go in there and play and finally at one of these times someone said “You two should try and write a song together!” so we did it and I think the first song that we wrote is Running. It was very easy for us to do it and it came out really cool and quick. No hang ups, so we thought “Well, let´s try another one.” And before we knew it we had three or four songs we felt good about. Then we thought “Hey, maybe we should make a record?” and that´s how we got here [with Smith/Kotzen].

Q: I read somewhere that Iron Maiden was actually the first show you went to?

A: No, the first concert I ever went to was Stevie Wonder, but it was also around the same time I went and saw my first rock concert, so yes, my first hard rock show was Iron Maiden on the Piece Of Mind tour and that was something. I loved it. I was a huge Iron Maiden fan as a kid and I still am.

Q: [Guitarist] Eddie [Van Halen], what did he mean to you?

A: That would be the first and one of the few guitarists that I tried to emulate as a young student of the instrument. I will never forget the first time I heard him and this is how out of touch I was. We were driving home, my parents had the radio on and I was in the back of the car and the guitar solo to Beat It (Michael Jackson) came on. That guitar started playing and my dad was about to turn off the car and I screamed and said “No!” and I scared him. From there I needed to find out who the hell was playing that. I had never heard a guitar sound like that. I had been around and I´d seen concerts and I was a Sabbath fan and a Scorpions fan, but I had never heard a guitar sound like that. That´s how I got turned on to Van Halen and from there I bought every record they made.

Q: So you hadn’t come across the band Van Halen before that?

A: Isn’t that crazy? (laughs) I’ll never forget, one of my young friends and I were looking through a magazine and and we saw a picture of Van Halen and said “Look at these guys! They ruined their guitars. Why would they paint their guitars like that?” I didn’t say that. My friend pointed to the picture and said it and we didn’t know who Van Halen was. We knew who Black Sabbath was, we knew the Scorpions, but we didn’t know about Van Halen.

Q: Writing songs for an album like [Smith/Kotzen], did you pick up things from each other when it comes to playing?

A: I don´t know. First and foremost with Adrian and I and really the reason why this works so well, is that we are both songwriters. Adrian writes song after song and he’s got tons of ideas and you know my track record of writing songs, that’s what I do. I don’t pick up the guitar unless I have an idea for a song, it’s that simple. The song element came pretty easy. With the guitar playing, that was easy as well, but it was real casual, like “Hey, Richie, why don´t you play the beginning of this and I’ll take the outro?” or “Hey Adrian, let me do the solo into the chorus because I have an idea about how I wanna get out of it.” We just did really what we wanted. Maybe we discussed a different approach to the songs in the mixes or something, but in general it was all just casual. Very easy and no egos. I think because we both have been doing this business of writing songs, recording them and performing them long enough to not have any bulls–t get in the way. If one of us was not a songwriter, if one guy was just a musician…I’m gonna separate something here. There’s a massive difference between a musician and a recording artist. A recording artist writes songs, signs publishing deals, signs recording contracts. A musician plays music. Sometimes they’re both. I’m both and Adrian is both, but if one of us was just a guy who kinda plays the guitar and does a lot of hot licks, you´d probably have some problems. It wouldn’t be about songs, it would be about somebody trying to show off. But, because our priority is songs, we don’t have any bullshit.

Q: Besides living close to each other and so on, what else made you guys click, so to speak? He´s British and in one of the biggest metal bands, you´re American and the cool looking guy?

A: (Laughs) Well look, I think Adrian’s pretty f–king cool and I’ve been a fan of his since I was a young boy trying to figure out his guitar licks. But the point of the matter is this, why this works is because we have a common ground. Adrian loves American blues and I grew up listening to traditional R&B and soul music and we both love the original rock bands like The Stones, The Who, Led Zeppelin, The Beatles and that’s our common ground. We both kinda have this love for soul and blues, but when it comes to rock and roll we’re gonna listen to The Stones before we put on a record from the 90’s or something, if you follow what I´m saying? That’s why we have a foundation to build on.

Q: Do you look at this as something that will continue? Will there be a second album?

A: Hey, if I have anything to do with it, absolutely. It’s an interesting thing because I remember this when we did The Winery Dogs and the record wasn’t even out yet and people were carrying on “Is it a real band? Are you gonna make another record?” and I said “Listen to the record we made first and worry about it later.” To be honest, yeah. The process was so easy and I don’t see a reason to not make another record as I sit here today. Of course.

Q: You mentioned The Rolling Stones. You opened up for them in Japan. I talked to Joe Satriani recently and he mentioned how cool Mick Jagger was when he played with him. What was it like opening for The Stones?

A: I’ll tell you something. The Rolling Stones never had an opening act in Japan ever. I was the only one to ever do it. In Japan it is traditional to not have an opening band. Normally you just go and see the headliner play and that’s the end of it. I was skeptical and I didn’t really brag about it or tell anybody about it until after I played the first show. Then I made a couple of phone calls from Tokyo or wherever we were and said “Hi, you´ll never believe what I just did.”, because I was convinced I was gonna get there and everybody’s gonna look at me and say “Who the hell is this guy?” The other thing that was really great was that when I got there, I knew half of the guys in the road crew from mutual friends, so all these guys were going “Hi Richie.” They all fu–ing knew me so it was great. Then, which was a kicker, before the last show you take a photograph with the band and I have it hanging up in my house. I had to sign a waiver that you can’t post it, can’t share it…so nothing with this f–king picture. It was the worst f–king resolution and they sent it to me and I was like “I don’t even know if I can print this f–ing thing.” I printed it and I hung it up. When they took the picture, Ron Wood came out and he looked at Mick Jagger and said “Oh my god Mick, did you hear this guy’s voice? Did you hear him sing?” and Mick said “No Ron, I´ll check it out.” Ron put his hand on my throat and said “Your voice sounds like early Rod Stewart. You sound like a combination between Rod Stewart and Bernard Fowler.” Bernard is the background singer for The Rolling Stones and he’s one of the coolest most badass singers that ever walked the earth, so Ron Wood just paid me a compliment, like the best compliment I could ever get paid. Comparing me as a hybrid between Bernard and Rod, in front of everybody, the whole f–king group. And in front of my f–king band and in front of Bernard who acted like he didn’t know who I was and I’ve known him for 15 f–king years. Ron looked at Bernard and said “Did you hear him sing?” and he said “No.” I was like “Are you out of your f–king mind? We hang out at the Sunset Marquis every f–king night!,” but you know, it was just a funny moment. That was a real “Pinch yourself Richie” moment.

Q: A final thing. Is there anything happening with The Winery Dogs?

A: No… you know, unfortunately it´s tricky because… look… Adrian and I, he’s got a house down the road from me, so we can get together whenever he’s in town. Billy (Sheehan) lives in Nashville, Mike (Portnoy) lives in Pennsylvania and I’m out in California, so for us to really do something proper and for it to be true to the band… Look, I can write a song and send it to Billy and tell him to put bass on it, but that ain’t a Winery Dogs song. We gotta be in the f–king room and until all three of us can agree… I think we should all go down to Nashville. Billy’s down there and he’s got a beautiful house. We’ve worked at my house, my old house, and we’ve worked at Portnoy’s house, but we’ve never worked at Billy’s house. I ain´t getting on an airplane anytime soon, I can tell you that, but once everybody’s clear in this Covid bulls–t, I’ll fly down to Nashville and work on an album.

Smith/Kozten will release their eponymous album on March 26th. Listen to the second single Scars, here. Also, for more details about this release, and to hear the first single, Taking My Chances, please go here.